Anchors Away! US, Brits Arrive at Sub Rescue Site!

(12:00 AM EST… Final Update!) THEY’RE UP! Interfax is now reporting that the submarine has reached the surface! The BBC is reporting all seven are alive and well! Thank the Lord!

One headline in Russia reads “God Help Us, We Can’t Breathe!”

US NAVY SENDS HELP TO THE SNAGGED SUB, VIDEO HERE

American and British sailors have arrived in Russia and are heading to the rescue site. 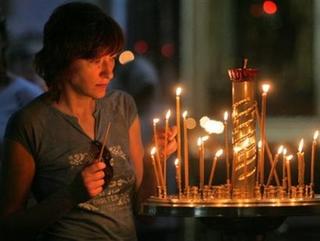 A Russian woman lights a candle at salvation of sailors of a mini-submarine in Kazansky Cathedral in St. Petersburg, Russia. The whole country is captivated with the plight of the trapped submariners. (AP)

“After the last cable holding down the mini-sub was cut off, rescuers found a piece of fishing net on the nose of the submersible,” Capt. Alexander Kosolapov was quoted as saying. “They were unable to take it off because the Scorpio had to be raised to the surface due to functioning problems.”

Update: (11:00 PM EST) Russians say they will have more information within the next hour. FOX News says that the British Scorpio had a glitch and has gone back down to the Russian Priz submarine.

Also MosNews is reporting about an unexpected delay:

Some unexpected problems seem to have appeared Sunday morning, after British Scorpio 45 underwater vehicle was done cutting the entanglements that ensnared the vessel on the Pacific seabed. According to Captain Alexander Kosolapov, spokesman for the Russian Pacific Fleet, the Scorpio had to be lifted because of some damage it suffered during the rescue operation, and the task of cleaning the Russian mini-sub from fishing nets had been left unfinished.

This new development prevents the rescue team from lifting the AS-28 mini submarine with 7 crew members on board: Navy specialists say, that the mini-sub has to be cleared of all entanglements for safe emersion. “Any remaining parts of the [fishing] nets should be removed, and the mini-sub should be cleaned entirely before it’s lifted”, — the Interfax agency quotes Kosolapov as saying.

Update: (9:40 PM EST) The submarine has been ordered to the surface! The process may start within the half hour. It is possibly a 5 minute process to reach the surface!

FOX News has just reported the same information in a news alert.

2 US Navy divers and a doctor are working with the British Scorpio crew.

Update: (9:30 PM EST) Russia says that it is not paying the Brits or US for assistance. Hmm.

The AS-28 mini-sub emersion is expected any minute now. Both the mini-sub’s crew of seven, and all ships at the rescue scene were given orders to prepare for emergency surfacing of AS-28 at the Berezovaya Bay off Kamchatka shore, where it lay trapped on the sea floor since Thursday morning.

Update: (8:20 EST PM) FOX News is now reporting that the Scorpio has cut through 1 hose and has 4 more to go. Russian news says that they have cut through 2 of the cables holding the sub down. The sub could surface at any time!
Ultraquiet No More has more news from Interfax.

Update: (7:30 PM EST) It was just reported on FOX News again that the submarine is being cut lose. The submarine will rise to the surface when it is freed. Russian news is saying that the crew on the sub is doing fine. Great News!

Update: (5:50 PM EST) The British Scorpio has arrived and will make a dive within the hour.

** The active stage has begun. Russian authorities believe they have 24 hours to save the crew! ** 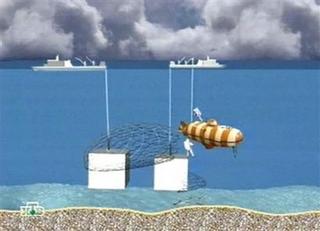 The Russian submarine, which had been participating in a combat training exercise, got caught on an underwater antenna assembly that is part of Russia’s coastal monitoring system and is anchored with a weight of about 60 tons, according to news reports. Officials said the sub’s propeller initially became ensnared in a fishing net. ‘We will try to lift the whole system, rip it off and bring it to the surface,’ Pacific Fleet commander Adm. Viktor Fyodorov said after that abortive effort. He said rescuers would try to raise the vessel closer to the surface, where divers could try to rescue the sailors, by lifting with enough force to pull two heavy concrete anchors from the sea floor. (AP Photo/NTV Russian Channel) (Image posted at 4:00 EST)

Update: (3:30 EST) Interfax is reporting that Russian military secrets are not in jeopardy:

The commander of Russia’s Pacific Fleet has denied allegations made by a former Russian Black Sea Fleet commander that U.S. and British participation in efforts to rescue the seven-member crew of the sunken Russian mini-submarine may expose Russian military secrets to NATO.

Officials just reported that they have started to raise the sub:

(This was just verified on FOX News channel)

Rescuers succeeded in pulling up the AS-28 mini-submarine and started raising it at the depth where divers could reach, the Navy Staff repo
rted on Saturday.

Rear Admiral Vladimir Pepelyayev said rescuers could pull up the mini-submarine in order to raise it to a depth where divers could reach it.

He explained that time was needed and now it was early to say if the operation was successful. At the same time, the admiral stressed that the last communication with the crew had taken place at 9.40 p.m. Moscow time. “They reported that their condition is satisfactory,” Pepelyayev said.

“Oxygen supplies should last until the end of today and for the following 24 hours,” he told Russian television.

“At present, the Russian ship with Britain’s rescue vehicle is moving to the site where the mini-submarine sank,” Pepelyayev told journalists.

The 13.5 metre-long mini-submarine is trapped by the fishing net and an anchored antenna of a coastal monitoring system. The first attempt to rescue the mini-submarine failed. There are five crewmembers, a staff officer, and a plant representative aboard the AS-28 mini-submarine.

The first stage of the stricken submersible rescue operation has been launch in the Berezovaya Bay, Russian Pacific Fleet commander Viktor Fyodorov said.”We have attached cables and are planning to raise [the vessel],” Fyodorov told the NTV channel.Two concrete anchors, which the deep-sea vessel had caught on, were pulled away from the seabed during the previous towing, he said.

Fyodorov added that the Tiger deep-sea apparatus helped the rescuers control the situation at a depth of 190 meters.

He also said that special vessels had powerful winches to raise the submersible to a depth which will allow divers untangle the net and rope trapping the vessel. 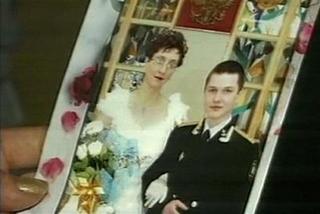 The wife of the Priz captain shows a wedding picture of herself and her husband Vyacheslav Milashevsky, 25, commander of a Russian mini-submarine stranded deep in the Pacific Ocean, at their home at Zaboika village in Beryozovaya Bay, about 75 kilometers (47 miles) south of Petropavlovsk-Kamchatsky. (Mosnews) 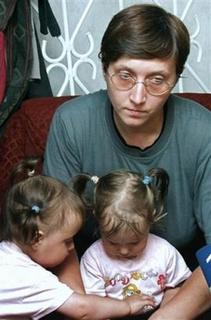 The submarine captain’s wife and children wait to hear news of his rescue. (AP)

Russia’s defense minister Sergei Ivanov has left Moscow for the Kamchatka peninsula in the Russian Far East to control the operation to rescue the crew trapped aboard the military mini-submarine.

The minister flew off to Kamchatka on Saturday after a meeting with the Russian president Vladimir Putin, Interfax news agency reported.

“Defense Minister intends to make sure that the whole possible complex of measures taken by the rescue operation headquarters is adequate to the given accident situation,” a ministry official was quoted by the agency as saying.

Task #1: Blow up the Anchors holding the sub to the ocean floor!

The 60-ton anchors holding a stranded Russian mini-submarine on the Pacific floor will be blown up within the next several hours, Pacific Fleet commander Adm. Viktor Fyodorov told Interfax on Saturday.

“A decision has been made to blow the anchors up, so the [mini-sub], attached by cables to rescue tugboats, can ascend. If the result is positive, deep-sea divers will start to work,” Fyodorov said. 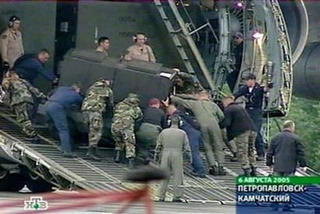 The Third Rescue Team has arrived in Kamchatka:

A U.S. Air Force C-17 transport carrying equipment and specialists for the operation to rescue a stricken Russian mini-submarine landed at Yelizovo airfield near Petropavlovsk-Kamchatsky at noon on Saturday, an Interfax correspondent reported from the scene.

A British C-17 and a U.S. C-5 carrying rescue equipment and experts landed at Yelizovo earlier on Saturday. 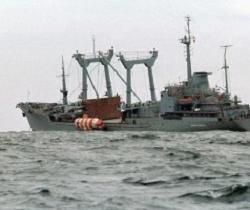 A Russian Navy Ship with a similar Priz submarine on its side. (ITAR-TASS)

The rescue team will lift the sub which will take from 1 to four hours:

The operation to lift Russia’s AS-28 mini-submarine, stranded in the Pacific off the Kamchatka Peninsula, will start by the end of Saturday, deputy naval chief of staff Rear Adm. Vladimir Pepelyayev told journalists in Moscow.

“In order not to bring this to a critical point, we will start the operation by the end of the day,” Pepelyayev said. “The lifting operation itself could take from one to four hours,” he said.

“Ultraquiet No More” the blog of ex-submariners has much more on the rescue.

Ex-Submariner and Blogger “Bubble Head” has more on the arrival of the Americans.

It will take the submersibles three hours to set up once they arrive at the scene.

Black Five is covering the story and The Indepundit is still on top of this story.
The Laughing Wolf has a good roundup.

Andrew at Siberian Light is using his Russian contacts to keep up with the story.