Have you heard the story of Luke Stricklin, yet?

Glenn Reynolds, the Instapundit introduced him to me today via Democracy Arsenal.

Here is Luke Stricklin’s Story in his own words… 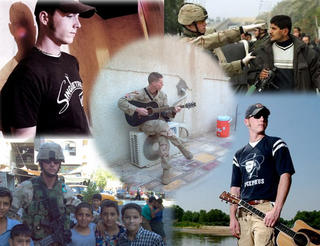 “I joined the National Guard when I was seventeen, went to boot camp in Columbus Georgia at Fort Benning home of the infantry. I was an infantry soldier attached to 1/153 Infantry. I was in boot camp during 9/11 and I can’t begin to describe the feelings I felt. I graduated and came back to Arkansas, and went to work and school. I met my wife in January 2002 and the rest is history.

I was deployed in September of 2003 in support of operation Iraqi Freedom. I spent 18 months on active duty, spending time in Fort Hood TX and Fort Polk Louisiana. During my 12 months in Baghdad, Iraq, I bought a guitar off the streets of Baghdad. It was no Martin but … it was playable. JR Shultz the (co-writer), Nick Brown and I spent as much time as we could together drinking coffee and playing music. Then we would head out on patrol and come back and do it all over again. It wasn’t very often that we got that much time off but when we did we made good use of it.

Every one at home always asked what it was like over there. And I would tell them it was hot and change the subject. Mom always said I wasn’t telling her the truth, which I wasn’t. I would tell her everything was just fine. Ashley my wife couldn’t hear me talk about it, we just talked about anything else.

So I thought about writing a song that could answer there questions. I looked at the bottom of my boots one day and it all began. They were worn out – I wore the same pair of boots everyday for at least 12 hours, for about 14 months so they were worn. JR put in his thoughts and we had a song. We recorded it on JR’s laptop with a sound recording program using a $10 mike I bought at Best Buy before I left home. 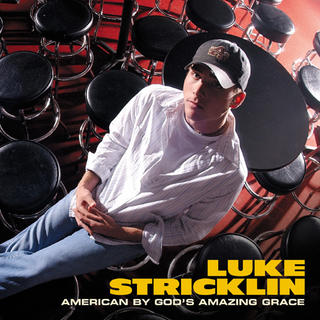 When I emailed the song home, I had no idea what type of things would transpire. It was first picked up by KTCS (Ft Smith AR). Soon KMAG picked up on it. When they started playing it, they were blown away by the calls. He then forwarded on to Big D and Bubba a nationally syndicated radio show based in Nashville. Big D and Bubba contacted my folks for an interview. With the interview set up via emails, I called from Iraq. The response was huge. When I returned stateside in March of 2005 the phone calls and emails were coming in from TV and radio stations all over the country. Steady requests for TV and radio interviews. In April I was given the opportunity to go to the recording studio for the first time in my life. “American by God’s Amazing Grace” was my first recording.

For a sample of Luke Stricklin’s outstanding hit,

You can order his debut CD on this page HERE