An associate to Osama Bin Laden is now working for the Iraqi Government in Turkey:

An American accused in court papers of having ties to Osama bin Laden is now working for the Iraqi government’s Foreign Ministry.

That’s according to U-S officials and a former C-I-A counterterrorism chief.

According to a court document, Tarik A. Hamdi — who was born in Iraq — was the “American contact” for a bin Laden front organization.

An affidavit alleges that Hamdi gave a satellite telephone battery to a bin Laden aide in Afghanistan for a phone used by the terrorist leader. The affidavit was unsealed this week in federal court in Alexandria, Virginia.

Al Hamdi supplied Osama with a phone battery for his satellite phone in 1998:

In early 1998, when John Miller of ABC News sought an interview with Osama bin Laden in Afghanistan. Needing an intermediary, his producers found Tarik Hamdi of Herndon, Virginia, a self-described journalist who helped make contacts and then accompanied the ABC news team to Afghanistan.

Hamdi, it turned out, had his own purposes for traveling there; he was to bring Bin Laden a replacement battery for his vital link with the outside world, his satellite telephone. From the remoteness of Afghanistan, Bin Laden could not simply order a battery himself and have it overnighted to him. He needed someone unsuspected to bring it. So, one of Bin Laden’s top aides ordered a replacement battery on May 11, 1998, and arranged for it to be shipped to Hamdi at his home in Herndon. Hamdi took off for Afghanistan with Miller on May 17 and shortly afterward personally delivered the battery.

Just over two months later, two bombs went off nearly simultaneously at the US embassies in Kenya and Tanzania, killing 224 and wounding thousands.

Ziyad Khaleel (also known as Ziyad Sadaqa), a student at Columbia College in Columbia, Mo. Khaleel bought the satellite phone carried to Afghanistan by Tarik Hamdi. The phone was used by Al-Qaeda for planning the two U.S. embassy bombings in East Africa in August 1998. 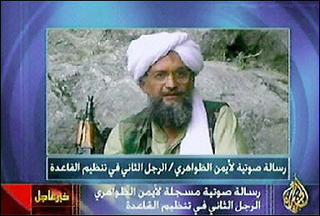 In addition to Bin laden the phone was used by his chief deputy, Ayman Al-Zawahiri, when he was captured and held in jail in Chechnya:

In addition to Bin Laden, the phone was used by the man considered his chief deputy, Ayman Al-Zawahiri, prosecutors said in the trial.

Al-Zawahiri had been head of Egyptian Jihad, a group that carried out terrorist attacks in Egypt, before joining forces with bin Laden’s al-Qaida organization, authorities say.

In December 1996, the month after Sadaqa bought the phone, Al-Zawahiri and two associates were arrested near Derbent, Russia, with a satellite telephone and details of a bank account in St. Louis, the Wall Street Journal reported in 2002. He was involved in a terrorist mission in Chechnya, but Russian authorities were unable to identify Al-Zawahiri, who was traveling under a false name, and he was released after about five months in a Russian jail, the newspaper reported.

The Islamic organization Sadaqa worked for in Columbia, Missouri received an extensive amount of aid from the US government including funding from USAID.