After mediation by the United States, Algeria has released 404 Moroccan POW’s after nearly 20 years of imprisonment:

The International Committee of the Red Cross (ICRC) said it had monitored the release in Tindouf, Algeria before being flown to Morocco to be reunited with their families.

It added that the handover followed mediation by the United States.

A government source in Rabat said the prisoners were expected to land in the city of Agadir, about 600km south of the Moroccan capital, soon after 1730 GMT. 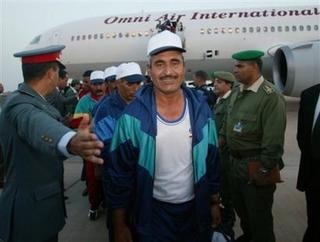 The prisoners arrive at Agadir airport, Agadir, Morocco, today after up to 20 years as prisoners of war. (AP)

Polisario said the release was intended to create an atmosphere helpful to efforts by a newly appointed UN envoy to solve the nearly 30-year-old dispute over the desert territory, mostly held by Morocco but claimed by the Algeria-backed Front.

“This will contribute, we hope, to generating a climate which will favour a dynamic for peace, which we would like to believe will be irreversible,” Mohamed Sidati, Polisario’s minister delegate for Europe, said in a statement carried by a Norwegian non-governmental organisation that backs the Front.

The release could ease tensions between Morocco and Algeria in a region where the West wants stability because of fears it could be a possible source of Islamic militancy.

Algeria and Morocco have had strained relations since independence from colonial ruler France in 1962 and 1956 respectively.

The Western Sahara dispute has hampered three decades of efforts to normalise ties.

US Senator Richard Lugar, (R-Indiana) chairman of the Senate Foreign Relations Committee, was to oversee the release on behalf of President George Bush.

It was not immediately clear if he was in Tindouf for the occasion. 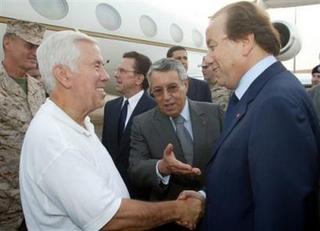 “Washington has long viewed the release of these prisoners as an important humanitarian goal and a constructive step for peace and stability in North Africa.” 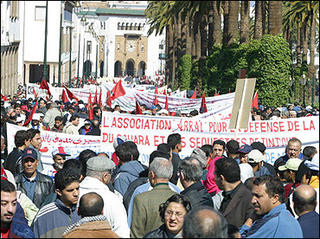 In March, 15-20 thousand people demonstrated in Rabat to demand the release of the 400 Moroccan war prisoners. (AFP)

Morocco thanked the US for the prisoner release:

Rabat thanked the U.S. administration for helping end the “ordeal endured by hundreds of prisoners” who had been held “in a blatant violation of international law” after the end of the armed conflict in 1991.

Neither the Polisario Front nor Algeria were to be thanked for the move, it said. “Their liberation is a belated fulfilment of an international obligation which has been demanded several times by the U.N. Security Council, yet it was ignored.”