Bishop Xie was arrested for “loyalty and obedience to the Pope.” 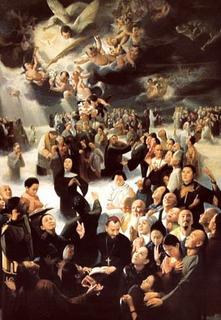 This painting commemorates the 120 Chinese Martyrs canonized in the year 2000 by John Paul II.

An elderly Chinese Catholic Bishop who had been jailed for 28 years because of his faith has died of leukemia in China:

Monsignor Xie Shiguang, the bishop of Mingdong, died of leukemia on Thursday. Xie, 88, was first arrested in 1955 by Chinese authorities “because of his loyalty and obedience to the pope,” and released a year later, Vatican radio reported late Saturday.

He was arrested again in 1958 and jailed until 1980, Vatican Radio said. Xie was also imprisoned from 1984-1987, and finally for two years starting in 1990, and was kept under surveillance by authorities until his death, the radio report said.

The Vatican praised Xie as a “courageous witness to Christ.”

Bishop Jia Zhi Guo, who heads the underground Catholic Church, is another Catholic Bishop who has spent most of the last 20 years under arrest in China:

The Chinese government, which insists that all religious groups must accept direction from the Communist Party, has a pattern of cracking down on the underground Catholic Church around the times of major Christian holy days and Chinese national holidays.

China only offers official recognition to the Catholic bishops approved by the Catholic Patriotic Association, which in turn is directed by the Communist Party. The “underground” Church, which remains steadfastly loyal to the Holy See, has been subject to steady pressure, with authorities frequently jailing clerics and laymen. At the same time, a large number of bishops of the “official” Church have reportedly frustrated the government’s plans by quietly establishing ties with the Vatican.

Bishop Jia has spent nearly 20 years of his life in jail (he is now 69). Last year he was arrested in April and twice in September before his December 14 arrest. The bishop has opened his home as a residence for 100 handicapped orphans. In 1999 the government shut down that orphanage, but finally bowed to international diplomatic pressure and allowed it to re-open.

There have been numerous reports of arrests and torture of Catholic Clergy in recent years in China. In 2000 the BBC had this report:

Chinese police have arrested an 81-year-old bishop in a clampdown on the country’s underground Roman Catholic church, according to an advocacy group.
They have also beaten and detained other priests, nuns and worshippers, the Cardinal Kung Foundation said.

Bishop Zeng Jingmu, who has already spent 30 years in jail, was taken from his home in eastern China’s Jiangxi province on 14 September, according to the United States-based group.

His detention came a week after the Vatican reported the arrest of another underground bishop, Jiang Ming Yuan.

Activists also reported that police in Fujian province had tortured an 82-year-old priest, Ye Gongfeng, until he fainted, had destroyed a church altar and beaten worshippers.

China prohibits people from practising their religion outside of state-sanctioned churches, temples, and mosques. And, although the “official” Catholic church, which has around four million faithful, does not recognise the authority of the Pope, there are another eight million Chinese who are loyal to the Pope and worship in secret.

Here is another article about more detentions of Catholic Clergy and pictures of the prison camps they are sent for punishment.