People from all over the world will flock to visit the “Peace Park” in the DMZ. 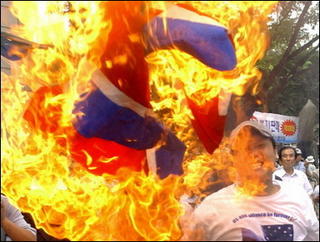 South Korean activists burn a North Korean flag during a protest in Seoul this week against Pyongyang’s nuclear programme. (AFP)

Talks will resume in Late August in China on North Korea’s nuclear program. South Korean President Roh says that the North needs to build trust on the nuclear issue.

Meanwhile,… Ted Turner suggests a “Peace Park” in the demilitarized zone between North and South Korea:

Speaking at a press conference at Grand Hilton in western Seoul, Turner said “ I am very hopeful that we can have a peace park’’ within the DMZ, the uncontaminated 250 kilometer belt dividing the two nations for the past 52 years.

“This is a unique environmental and ecological treasure and we believe that people from all over the world will come and see it,’’ he said, adding the area’s potential for tourism is “very high.’’ 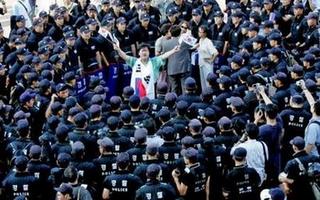 Like a scene from the Matrix, a South Korean man protesting against North Korea is surrounded by riot policemen at a rally, in front of the venue where the inter-Korean celebration of the anniversary of independence from Japanese colonial rule is held, in Seoul August 14, 2005. (Reuters)

Also, this week, Kim Jong Il, received a nice gift from Comrade Chavez during the World Festival of Youth:

Leader Kim Jong Il received a gift from the Venezuelan National Preparatory Committee for the 16th World Festival of Youth and Students. The gift was handed over to the head of the DPRK delegation of youth and students to the festival on August 15 by General Secretary of the Communist Youth of Venezuela David Velazques who is chairman of the preparatory committee.