A New Junta Gets to Work in Mauritania

VIDEO OF THE COUP IN MAURITANIA HERE

The new junta takes over in Mauritania and promises no member of the 17-man junta will run in elections they say will take place in less than two years.

The Prime Minister stepped down today after the bloodless coup from last week. 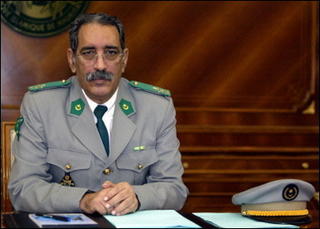 Military strong man Ely Ould Mohamed Vall says he will lead the northwest African state to democratic elections in two years at the most. (AFP)

More than 20 men accused of Islamic extremism by the fallen regime of Maaouiya Ould Sid Ahmed Taya were released to cheering crowds on Sunday.

On Saturday, the junta which has seized control assured political parties none of its members will stand for office.

There were celebrations on the streets of the capital, Nouakchott, following the release of members of Mauritania’s popular Islamic movement.

Mohamed el Hassan Ould Dedaw, a former Imam from Nouakchott, was one of 52 members of the movement to have been held for months without trial.

The decision by the military council to release the Islamists, just days after seizing power in a bloodless coup, is seen as confirmation that they were in fact political prisoners.

Members of the Islamic movement say their leaders were imprisoned as part of an attempt by the ousted president, Mr Taya, to crush all opposition.

Under Mr Taya, the Islamic Republic of Mauritania became one of only three members of the Arab League to establish diplomatic ties with Israel.

Islamic leader Mohamed el Hassan Ould Dedaw, was jailed earlier during the opening phases of the US-led War in Iraq:

Taya’s government cracked down on pro-Saddam rallies during the recent U.S.-led war in Iraq, and blocked what it claimed were fundamentalist attempts to use mosques to recruit fighters for the Iraqi leader.

Haidalla (Taya’s opponent in the 2003 elections) during the run-up to the vote appeared to have backing from a wide range of voters, including moderates weary of Taya’s long and restrictive rule.

He campaigned side-by-side with a leading Islamic cleric whom Taya’s regime had jailed for four months during the U.S.-led Iraq offensive this year.

“During this situation where Israel is killing Palestinians and ruining their homes, I can’t see why we should have relations with them,” Dedaw said.

Mauritania has never seen a peaceful transfer of power in its 43 years of independence from France. 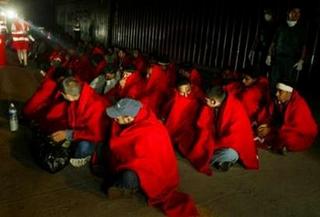 A fishing boat from Mauritania laden with 143 immigrants from India and Pakistan was intercepted by Spanish authorities in the Strait of Gibraltar on their way to Spain. (Reuters)