A New Crisis in Ecuador

The new president of Ecuador is facing his first big challenge. 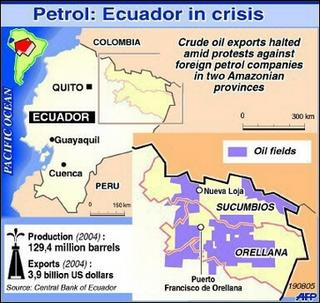 A map of the troubled oil rich areas in Ecuador. Government forces declared a state of emergency on Thursday. (AFP)

The government moved in on the protesters yesterday in Ecuador:

Ecuador’s army has stepped up efforts to quell protests which have crippled production in the oil-rich Amazonian region of the country.
The army says it has regained control of a number of installations, and the state oil firm says it is slowly resuming production.

Earlier, the defence minister resigned. His replacement has authorised the army to use force to end the unrest.

Protesters want some of Ecuador’s oil money to be invested in the region.

The authorities say they will not negotiate until the protests cease. 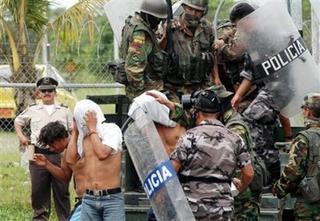 The Defense Minister in Ecuador resigned late this week amid the protests:

No reason was given for the resignation but the defense minister had to implement a state of emergency declared Wednesday in two oil producing provinces where protests have grown demanding a greater share of revenues.

Calling the situation an “economic emergency,” Barreiro told reporters: “We are trying to contact Venezuela to see if they can send oil to us, so we can continue exporting and maintain the most normal situation possible.” 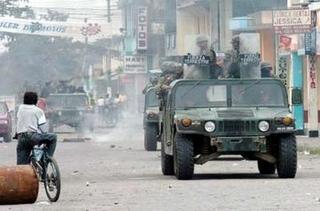 Ecuadorean military patrols a street of Nueva Loja, Ecuador August 18, 2005. The Ecuadorean government declared on Thursday a state of emergency in the two Amazon provinces of Sucumbios and Orellana after protesters caused severe disruption to the country’s oil production to press their demand for greater spending on infrastructure and social programs. (Reuters)