THE 12 YEAR OLD BOY FROM MOSUL
SINGING A SONG TO HIS TROUBLED HOMELAND
IS STEALING THE SHOW AND THE HEARTS OF IRAQIS,
VIDEO HERE

Twelve year-old Bilal, from the northern city of Mosul, dedicated his song in the Iraqi Pop Idol Contest to a broken homeland and to its crying streets. 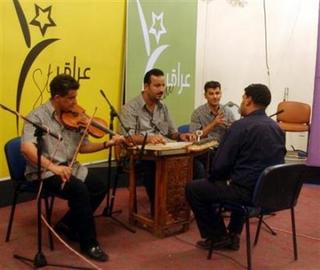 Iraqi musicians perform during the taping of the television show ‘Iraq Star’ in Baghdad August 10, 2005. (Reuters)

About 2,000 contestants have auditioned for the hot Iraqi Pop Idol Show:

“We’re trying to help ease the burden and troubles of our people.”

But taking part is a nerve-wracking experience for Iraq’s would-be stars.

They have often braved bullets and bombs just to reach the studio, only to have their egos badly bruised when they are bluntly told to go home and practice more often.

Twelve year-old Bilal, from the northern city of Mosul, dedicated his song to a broken homeland and to its crying streets.

He was not the only person in the studio who broke down as he performed. Even the hardest judges were moved to tears.

Laith Ali, an Iraqi who works for the BBC’s bureau in Baghdad, described the importance of Bilal’s emotional performance.

“When this 12-year-old boy on Pop Idol came along, he sang a song which made us feel for our nation.

“He sang his song with incredible emotion. And the way he sang was as though he was a professional.”

“The words he used were not ordinary words, and they were very effective in conveying strong emotions,” said Laith Ali.

“They were so powerful. I was very moved by the performance. 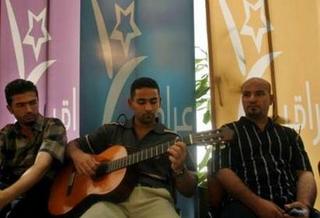 An Iraqi musician (C) performs during the taping of the television show ‘Iraq Star’ in Baghdad August 10, 2005. (Reuters)

It is interesting that many Iraqis already watch “American Idol” and the British “Pop Idol” but this Iraqi version is a bold new initiative for a nation longing for peace in the days ahead:

“Iraq Star” is a brave indigenous effort to perk up the spirits of a depressed nation. The studio set is spartan and drab, and there is no studio audience, though viewers are being promised tinseltown touches when the finale is held in Beirut.

“We are trying to lighten the load and problems Iraqis are going through,” said director Wadia Nader during recording of an episode on Sunday in a Baghdad hotel.

“We had shows like this in the 1960s when people were discovered on television. But since then, with so many wars, Iraqis couldn’t see this kind of thing,” he added.

Drawing on a rich native heritage, the show takes Iraqis back to the era before Saddam Hussain and the successive traumas of war, domestic repression and international sanctions.

“We have people coming from across the provinces to audition who say everyone they know is watching.”

…And, a small boy sings his hopes to a nation.