The news stations are silent now for the people. The radio station was jammed by the government. No photographs are allowed. The people are dying a secret death!

Reader “Zimbo in America” sends me a letter from Zimbabwe sent to him by Zimbabwe John*:

I reckon that these are the last days of TKM and ZPF. The darkest hour is always before dawn. We are all terrified of what they are going to destroy next……..I mean they are actually plowing down brick and mortar houses and one white family with twin boys of 10 had no chance of salvaging anything when 100 riot police came in with AK’s and bulldozers and demolished their beautiful house – 5 bedrooms and pine ceilings – because it was “too close to the airport”… so we are feeling extremely insecure right now. You know – I am aware that this does not help you sleep at night, but if you do not know – how can you help? I feel so cut off from you all knowing I cannot tell you what’s going on here simply because you will feel uncomfortable. There is no ways we can leave so that is not an option. 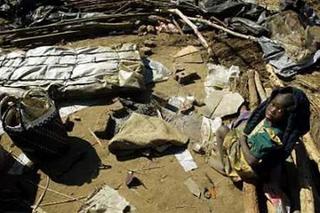 I just ask that you all pray for us in the way that you know how, and let me know that you are thinking of us and sending out positive vibes… that’s all. You can’t just be in denial and pretend its not going on. To be frank with you, its genocide in the making and if you do not believe me, read the Genocide Report by Amnesty International which says we are IN level seven (level 8 is after its happened and everyone is in denial). If you don’t want me to tell you these things then it means you have not dealt with your own fear, but it does not help me to think you are turning your back on our situation.

We need you to get the news OUT that we are all in a fearfully dangerous situation here. Too many people turn their backs and say – oh well, that’s what happens in Africa. This government has GONE MAD and you need to publicize our plight or how can we be rescued? You can’t just say “oh you attract your own reality”. The petrol queues are a reality, the pall of smoke all around our city is a reality, the thousands of homeless people sleeping outside in 0 degrees Celsius with no food water, shelter and bedding are a reality.

Today a family approached me, brother of the gardener’s wife with two small children. Their home was trashed and they will have to sleep outside. We already support 8 people and a child on this property and electricity is going up next month by 250% as is water. How can I take another family of 4 – and yet how can I turn them away to sleep out in the open? I am not asking you for money, or a ticket out of here – I am asking you to FACE the fact that we are in deep and terrible danger and I want you to pass on our news and pictures and don’t just press the delete button. Help in the way that you know how. Face the reality of what is going on here and SEND OUT THE WORD. The more people that know about it, the more chance we have of United Nations coming to our aid. 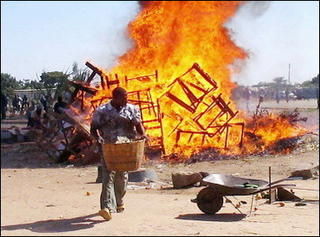 Please stop ignoring and denying what’s happening. Would you like to be protected from the truth and then if we are eliminated how would you feel? Surely you would say “if only we knew how bad it really was we could have helped in some way”. I know we chose to stay here and so we “deserve” what’s coming to us. For now we ourselves, have food, shelter, a little fuel and a bit of money for the next meal – but what is going to happen next? Will they start on our houses? All property is going to belong to the State now. We no longer have SW radio which told us everything that was happening because the government jammed it out of existence – we don’t have any reporters, and no one is allowed to photograph. If we had reporters here they would have an absolute field day. Even the pro government Herald has written that people are shocked, stunned, bewildered and blown mindless by the wanton destruction of everyone’s homes which are supposed to be “illegal”, but which a huge percentage of them actually do have licenses for.

Please – have some compassion and HELP by sending out this report so that something can be DONE! Please pray for us!

* I changed the names on this post due to safety concerns.

Update: Cox & Forkum get it!