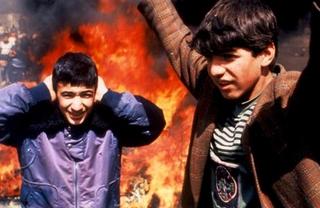 While the world has focused its attention elsewhere, war was declared last month in Kurdistan. Kurdish officials recently urged an uprising in southern Turkey over the “massacre in Wan”:

The Kurdistan Democratic Confederation called on Kurdish people and asked them to spread the uprising in southern Turkey, which started over the massacre of Kurdish civilians in Wan (Van) to all parts of Kurdistan and make it continual. KKK also called on all the democratic circles not to stay silent against massacres such as this.

The head of the Kurdistan Democratic Confederation said in late June “Despite all our efforts and calls to solve the Kurdish issue by democratic and peaceful means the government of AKP’s reply is to perpetrate a massacre against our people in Wan” and “Despite all the attacks, we salute our people for their popular uprising in Wan which lasted for two days”

“AKP and the Turkish government don’t have any other solution and the statements made by them about human rights, democracy and freedom are all to deceive foreign public opinion and our people. It is very clear with their massacre in Wan that their only solution is to carry on with their denials and attempted eradication of our people. It is a well known fact by world public opinion and our people that leader APO’s progression of a one sided cease-fire and to solve the problems by democratic means continued for the last seven years despite all the difficulties.”

A short while ago in Adana, and now in Wan they have attacked the Kurdish people whom were conducting their humane duty to burry two guerrillas. They killed a nineteen-year-old youth and injured 11 Kurdish patriots. These are all showing the Turkish government and the AKP’s dirty and dangerous ambitions against the Kurdish people”

This is intended to “break the resistance of the Kurdish People who are seeking their rights” but pointed out that this will not work “contrary, our people’s answer will be increasing the popular uprising” 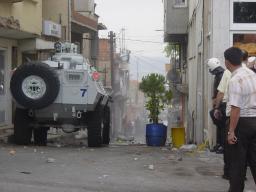 The Kurdish youth were demonstrating against the isolation of Ocalan and against the Turkish military operations in Kurdistan. When the protesters reached the main street, they were stopped by Turkish Police who had blocked three roads at the intersection with APC’s (Armoured Personnel Carriers). The police tried to scatter the protesters with water cannons and teargas. Turkish police fired in the air when protesters started to throw stones and Molotov cocktails.

The youth set up barricades and continued to throw Molotov cocktails as they shouted slogans as ‘Long Live Leader Apo’, ‘Kale wake up, see after your freedom’ and ‘The youth are Apo’s militants’.

After one hour of clashes the Turkish police broke the barricades and chased the protesters through cross streets and on top of rooftops. The police failed to catch and arrest any of the protesters.

Iran is blamed for assassination attempt of Kurdish dissident in Iraq

On Wednesday July 6th a former Pro-Kurd politician was slain in Turkey and more unrest was reported this week:

Hikmet Fidan, 50, was killed outside an apartment building in a busy section of the regional capital of Diyarbakir, and police were searching for the gunman.

Fidan was vice-chairman of the People’s Democracy Party (HADEP), banned in 2003 for alleged links to the separatist Kurdistan Workers Party (PKK).

The PKK took up arms against the Turkish state in 1984 to carve out an ethnic homeland. More than 30,000 people, mostly Kurds, have died in the ensuing conflict.

The violence has subsided since the 1999 capture of PKK leader Abdullah Ocalan. But there has been a increase in clashes since the end of the PKK’s unilateral ceasefire last year

Several Kurdish activists and politicians were assassinated or disappeared at the height of the conflict in the 1990s, but such killings have dropped off sharply in recent years.

In a separate incident, a PKK guerrilla was killed and two others were seriously wounded in a clash with Turkish troops in in a valley in Mardin province during an operation launched on Tuesday evening against the militants, a security official said.

Update: (Sunday PM) No sooner do I right this and a bomb goes off at a resort in southern Turkey blamed on a rebel Kurdish Group…