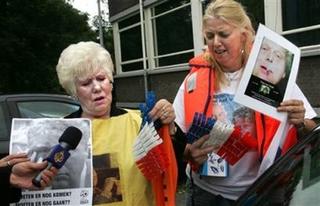 Demonstrators outside the court house today where Bouyeri was sentenced to life in prison.(AP)

The three-judge panel of the Amsterdam high-security court announced the life sentence against Bouyeri for the murder which the prosecution said signaled the end of innocence for the tolerant Netherlands.

To show just how severe the judges believe this reading is, they have order that Bouyeri be present in court as the verdict was read out –something almost unheard of in the Netherlands, where suspects are not obliged to attend the reading of the verdict and it is very rare that a court orders a suspect to attend.