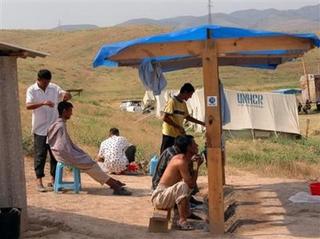 Also, yesterday, the 450 refugees who fled to Kyrgyzstan after the May 13th Massacre were flown to Romania for safe haven in a UN sponsored action. (AFP)

The Uzbek Government formally evicted the US from the Karshi-Khanabad airbase it has been using since shortly after 9/11,yesterday. Tensions have been increasing between the two countries since the US put pressure on the Central Asian country to allow an international investigation following a government slaughter of protesting civilians in May:

Uzbekistan formally evicted the United States yesterday from a military base that has served as a hub for combat and humanitarian missions to Afghanistan since shortly after the attacks of Sept. 11, 2001, Pentagon and State Department officials said yesterday.

In a highly unusual move, the notice of eviction from Karshi-Khanabad air base, known as K2, was delivered by a courier from the Uzbek Foreign Ministry to the U.S. Embassy in Tashkent, said a senior U.S. administration official involved in Central Asia policy. The message did not give a reason. Uzbekistan will give the United States 180 days to move aircraft, personnel and equipment, U.S. officials said.

If Uzbekistan follows through, as Washington expects, the United States will face several logistical problems for its operations in Afghanistan. Scores of flights have used K2 monthly. It has been a landing base to transfer humanitarian goods that then are taken by road into northern Afghanistan, particularly to Mazar-e Sharif — with no alternative for a region difficult to reach in the winter. K2 is also a refueling base with a runway long enough for large military aircraft. The alternative is much costlier midair refueling.

The Registan has much more on the Uzbek refugees relocating to Romania.

And, Robert Mayer at Publius Pundit has much more on the refugee transfer.