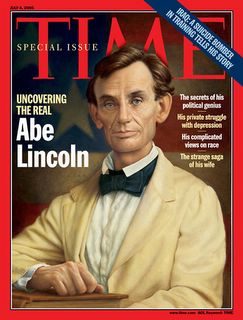 Honest Abe wouldn’t be happy with this issue.

I wrote on Friday about an interview that Time magazine had with a confessed terrorist and hopeful suicide bomber in the July 4 issue of the magazine.

The article “Inside the Mind of an Iraqi Suicide Bomber” was disturbing for a number of reasons:

1.) Time confesses that no attempt was made to track the terrorist after the interview.

“And, out of concern for the safety of TIME’s staff, no attempt was made to track his whereabouts after he left.”

This is after the terrorist confessed to his desire to kill Americans and Iraqis.
Could he have been this killer?

2.) How does a news organization line up an interview like this one in the first place? And, is there a transfer of money to the terrorist group?

3.) Time projects wrongly that the terrorists (insurgents) we are battling are Iraqi’s.

…Among the embittered population of Iraq, it’s not hard to find young men who talk the terrorist talk, boasting of their willingness to serve as human bombs.

They are foreigners and not members of an “embittered population” as Time would have you think.

4.) Time sympathizes with the terrorists calling them “pious” and “religious people”.

5.) Time falsely accuses the US of firing on civilian demonstrators in April 2003.

They repeat this absurd story from the terrorist and iresponsibly just leave it hanging out there. This is similar to what Newsweek did with the Koran in the toilet story. Newsweek also hung that story out there and after riots and 14-20 dead Afghanis and pressure from Pakistan and Afghanistan as well as the US Administration they withdrew the untrue allegation.

Here is what Time has written:

…Marwan (the interviewed terrorist) joined the insurgency in April 2003 when U.S. soldiers fired on a crowd of demonstrators at a school, killing 12 and wounding many more. Marwan, who took part in the protest, escaped unharmed, but the event proved decisive…

Time leaves his story unchallenged! So that any Anti-American can use it as fodder for their cause or destruction. This goes beyond irresponsible journalism.

Here is what Time reported about “Marwan”:

Even his distinctive Fallujah accent is not uncommon amid the din of the Iraqi capital, where suicide bombings are most frequent.

So, the magazine must be believing that Marwan was from Fallujah.

However, if Time were to look at a timeline of the War in Iraq the US did not even enter Baghdad until April 9th of 2003, when the statute of Saddam Hussein was toppled.

The incident that Marwan must have been talking about was from a Fallujah schoolyard on April 29, 2003. (I wonder if Time checked this out?)

The locals had gone to a mosque and then decided to go protest at 10 PM at night!

– The Iraqis at the protest say they were shot at for no obvious reason.

– The US soldiers say they waited to fire at as a last alternative after many warnings and finally being shot at themselves.

But, Time goes with what the terrorist said and just takes it as fact.

I’d say putting the word of a terrorist/suicide bomber over that of US Marines goes a bit beyond biased reporting. And, to leave the terrorist’s story out there without comment or clarification is more than irresponsible!

Fact-checking the terrorist’s comments and opinions was the least thing that Time could do, especially since they let him walk out and kill some more of our soldiers and Iraqi civilians after the interview.

Update: Thanks to reader Phyllis for reminding me to put the contact address for Time…