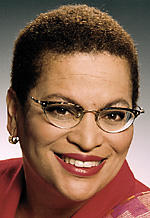 I heard this today and could not believe it. This woman was clearly out of her mind. It is nice to know that she is a writer for USA Today!

From “Sean Hannity’s Radio Show” today as reported by NewsMax:

“Terrorism in the United States is as old as we are. You want me to give you a litany of terrorism? You want me to start with what’s happened to the Indian population? You want to go on to what happened in Tulsa, Oklahoma, in 1921?”
“C’mon now, Sean,”
Malveaux told Hannity. “We are terrorists.”

Asked point-blank if the U.S. was a “terrorist nation,” Malveaux shot back: “Oh, Absolutely.”

Update 2: (Wednesday AM) Lori Byrd is also carrying the story this morning.