In the words of Arthur Chrenkoff, here is some desperately needed
“Good News from Europe”

Unbeknownst to most Americans, some Danes came out to show their support for George W. Bush last week on his stop in Denmark. 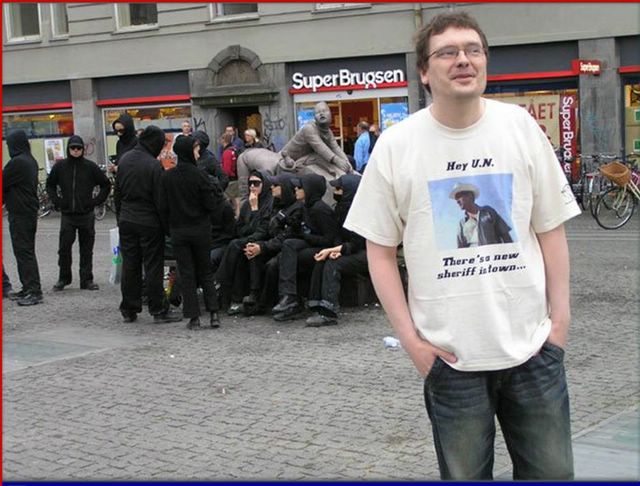 This is my favorite picture of all!…While the 250 “Men in Black” were prepping for their AP, Reuters, and BBC exposure,… this young Pro-American was sharing a different message! (Maybe these 1,000 brave protesters in Iraq should start wearing black! Maybe then they’d get more media exposure? Just a thought… but I’ve digressed.)

Danish bloggers Fred og Frihed put out an invite to the Pro-Americans in Denmark to join them for a rally to show support for US President George W. Bush on his stopover in Denmark. 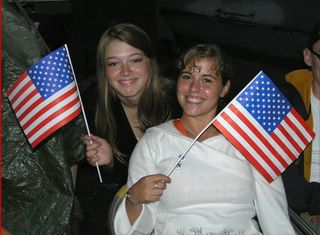 THEY DO NOT REPRESENT US!

Tired of their monopolization of the headlines each and every time meetings are held with foreign heads of state, we would like to show that there are dissenting voices to this line.

We are not all mindless ideologues, and some of us do indeed value the contributions the US has made in spreading democracy and freedom on a global scale under
President Bush.

To show this, we have decided to demonstrate our support for the USA outside the US embassy in Copenhagen, Denmark on July 6, 2005.

We invite everyone who treasures the role the USA plays in the world to join us. 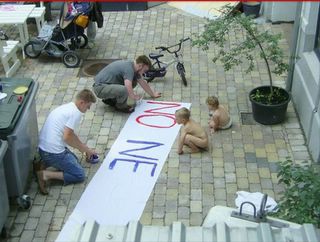 Some Europeans are propagating!

But they are not the only Danes who are Pro-US as was noted this week in the news. Aage Bjerre is a Great Dane who was arrested for his expression of support for the US. Dirty Harry and Michelle Malkin had more on his story. You can reach his website here. 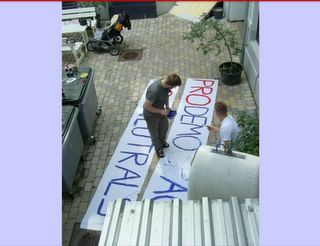 Getting ready to rally!

HERE IS A VIDEO OF THE BUSH SUPPORTERS SINGING “HIS TRUTH IS MARCHING ON” IN THE RAIN IN DENMARK! 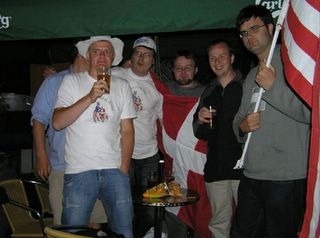 A Danish cowboy! Who knew?!

THIS PREVIOUS POST HERE HAS A VIDEO OF PRESIDENT BUSH BLOWING OUT HIS CANDLES ON HIS BIRTHDAY “DANISH”. 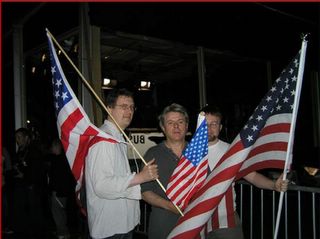 As not seen on the AP wires.

And, Arthur Chrenkoff has more on our Danish Allies. 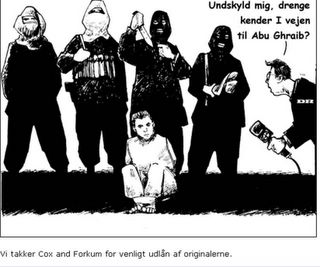 Looks like Cox & Forkum, the talented American political cartoonists, have made a name for themselves in Europe, too!

I must thank commenter Mikkel at Chrenkoff for the link to this Danish blog.
Thanks to Powerline for the comments.
Instapundit is reporting on the Pro-American rally.

Over the last four years he has toppled two dictatorships and brought democracy to 50 million people. He has turned a frontal assault upon the life, health, economy and life style of modern democracy around and turned it into a process bringing modernization and democratization to some of the darkest and most oppressed places on Earth.

Some of us are bloody sick and tired of the relentless barrage from the media and other opinion makers.

We’re sick and tired of seeing our tax money funding blatant anti-American propaganda dressed up as “documentaries” or “debate”.

We’re sick and tired that it’s alright to shoot terrorists, but a war crime to curse at them.

We’re sick and tired of the UN, controlled by a random gaggle of dictatorships that are themselves guilty of oppressing and abusing their peoples.

We’re sick and tired of being told that you can talk your way out of any danger, no matter how big.

We’re sick and tired that an intervention led by the US invariably meets with massive disapproval, while for instance France can do whatever they want on the Ivory Coast with barely anybody noticing or commenting upon it.

And we’re in particular sick and tired of the fact that so many members of the media and other opinion makers can’t tell a friend from the enemy!

WE HAVE, QUITE SIMPLY, HAD ENOUGH OF IT!