** Saddam Hussein was back in court today facing new charges **

On July 8, 1982, a small group attacked a convoy carrying the Iraqi leader through Dujayl, a Shiite village north of Baghdad. A series of detentions and executions in the town followed the failed assassination attempt.

According to the tribunal, 15 people were summarily executed, and some 1,500 others spent years in prison with no charges and without trial dates. Ultimately, another 143 people had “show trials” and were executed, the tribunal said.

There was more in the news today about the motley crew of lawyers who are preparing to defend him.

Saddam’s legal team includes 1,500 volunteers and at least 22 lead lawyers who come from several countries, including the United States, France, Jordan, Iraq and Libya. No date has been set for the trial of Saddam, captured by U.S. troops in December 2003.

Star members of the Defense Team include:

The fiercely anti-war (Anti-American) Clark has met with Saddam several times over the past 15 years and was considered a friend of Saddam’s Iraq when it was hit by sanctions in 1990 for invading Kuwait.

…An embittered casualty of the ’60s, and Attorney General for the LBJ administration, Clark assumed a leftist posture after leaving the Justice Department. He became the lawyer for anti-war protestor Philip Berrigan, headed a private probe into the FBI killings of Black Panthers Fred Hampton and Mark Clark, and travelled to Vietnam to condemn the bombing.

In June 1980, with America mesmerized by the Iran hostage crisis, he joined a forum on “Crimes of America” in Tehran–the first of many such junkets. The ’80s saw him globetrotting to schmooze with any dictator who happened to be on the White House shit-list…

He has advised, among others, David Koresh, the leader of the Branch Davidian religious sect who died with 75 followers when U.S. federal agents stormed their compound in Waco, Texas in 1993. 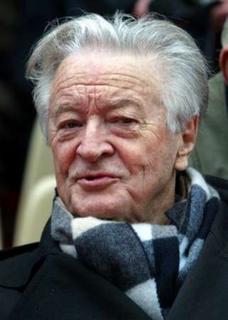 Roland Dumas a colorful octogenarian who served as France’s foreign minister from 1988-93 and who was once head of its constitutional court.

Dumas, who during his career acted as executor of Pablo Picasso’s estate, was also famously implicated and then cleared in one of France’s biggest corruption scandals.

Roland Dumas, and of the former head of Elf, Loïk Le Floch-Prigent were convicted of corruption in France in 2001.

Issam Ghazzawi said the deaths of Kurds and Shi’ite Muslims were not down to Iraq’s deposed leader but the regime in the neighbouring country.More than 100,000 Kurds were estimated to have been killed by Saddam’s troops in 1988.

Around 5,000 of these are said to have been gassed to death in the city of Halabja and another 8,000 members of a powerful clan rounded up and shot.

* But Mr Ghazzawi told Austria’s Die Presse newspaper: “Iran is responsible for the the murders of the Kurds.” * 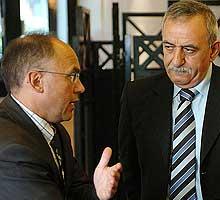 Little is known outside his own country, except a for his penchant for controversial cases. In the past he represented a cancer sufferer suing over the Chernobyl disaster. In case you were wondering the suit wasn’t against the Soviet Union but the French government for allowing people to consume food possibly contaminated by the radioactive fallout over France. According to one recent report, “Mr Ludot… called the Iraqi penal code ‘Stone Age legislation’ and said it was ill-suited to Saddam’s case.” One would have thought it was very well suited.

Mohammed Rashdan who was leading the team was later released by the family.

Another French member of the team, Jacques Verges, famous – or notorious – as defender of Nazi war criminal Klaus Barbie and international terrorist Carlos the Jackal. Charmingly, he “is said to have been a friend of Pol Pot, the Khmer Rouge leader behind Cambodia’s genocide.” 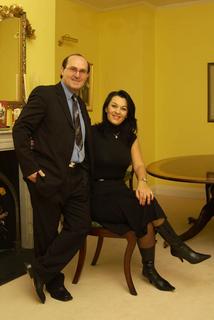 Another team member is British-based Giovanni di Stefano, multi-millionaire and former controversial director of Dundee football club. And a lawyer, apparently. Di Stefano has in the past rubbed shoulders with some interesting characters.

He had this to say about the late Serbian ethnic cleansing mass murderer Arkan: “He loved me very much as a human being. And I liked him as a person. He had good morals. He was a good person. And I’m not ashamed of saying it.” He also claims to have met Osama bin Laden in Baghdad in 1998 (!): “He had a handshake like a woman. He had a soft voice. He spoke like a priest.”

Giovanni is described as a globe-trotting Anglo-Italian who has been convicted of fraud – and was exposed as a liar in Auckland in 1990 – re-emerged in the New Zealand media with his defense of Saddam. 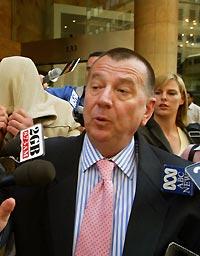 Australian John Marsden, who successfully fought off paedophile allegations, has been asked to join the legal team representing the former Iraqi dictator, is used to defending high-profile clients such as notorious backpacker killer Ivan Milat. 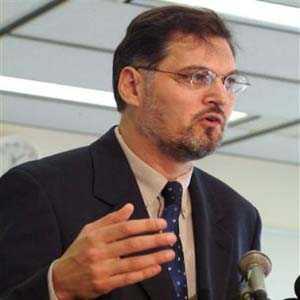 Then there is American academic (Professor of Human Rights Law at American University in Cairo) and lawyer Curtis Doebbler. Doebbler is a former legal advisor to the Palestinian Authority, and has been representing suspected terrorists held at Guantanamo Bay (or as this note delightfully puts it, he “served as an advisor to the Taliban on the laws of war”).

In addition, around “1,500 volunteers, 400 American professors and 200 consultants from different countries, including France and Latin American nations” back the defence team, Ghazzawi said.

Earlier this month, Saddams chief lawyer quit after battling with the Americans on the team:

* Saddam Hussein’s chief lawyer, Ziad al-Khasawneh, quit the Iraqi dictator’s Jordan-based legal team, saying Thursday some of the team’s American members were trying to control the defense and tone down his criticism of the U.S. presence in Iraq. *