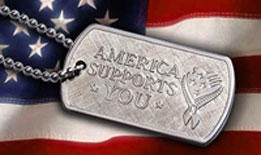 California Conservative is passing on a way you can support the American Troops this Independence Day.

“Hugh Hewitt interviewed Matt (BlackFive), Matt Heidt (Froggy Ruminations), Lt. Smash, Austin Bay and Michael Yon today. In the discussion, he heard that since President Bush mentioned America Supports You and suggested Americans leave a note for the troops deployed, relatively few have made the transition from TV to URL.”

Here is the easy link to get to the site…

…so that you can leave a message for the troops for the men and women fighting for our freedom and peace.

California Conservative has more at his site… and a great coastline picture!