The longest Civil War in Africa may finally be coming to an end. 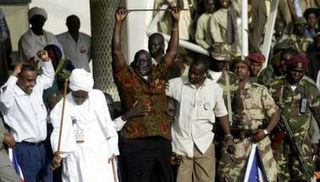 After 21 years of exile, Rebel Leader John Garang was welcomed back into the capital of Khartoum today:

Southern Sudanese leader John Garang has been given a rapturous welcome in Khartoum on his first visit to the capital since civil war began in 1983.
Hundreds of thousands of people lined the streets which were decked out in the black, green, white and red colours of his SPLM former rebel movement.

Under January’s deal to end 21 years of war, he is due to be sworn in as first vice-president on Saturday.

Until recently, waving an SPLM flag in Khartoum would have invited arrest.

Four Million may turn out to see the new Vice Presiedent of Sudan today:

Loudspeakers on a truck blared slogans of welcome, saying “Our heroic leader is coming to Khartoum today.” Sudan state television estimated four million people could turn out to welcome Garang some 3.5 million southerners alone live in the capital.

“Garang is a hero who succeeded in leading his people to victory,” said William Ezekiel, managing editor of the Khartoum Monitor, an English language newspaper currently suspended by the government. “His coming means a new page in Sudan … a new era in Sudanese politics whereby a non-Muslim can take up such a position.”

Garang stepped off a jet at Khartoum’s international airport and was greeted by about 100 government ministers, political party members and other dignitaries who lined a red carpet and shook the influential former rebel chief’s hand. 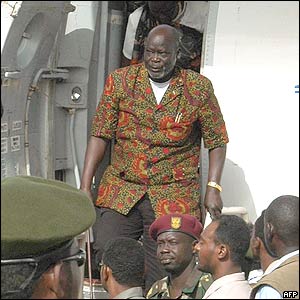 John Garang, the rebel leader turned VP is welcomed into the capital of Khartoum today.

John Garang is the first southerner to hold office in Sudan since it’s independence from Britain in 1956:

The creation Saturday of a national unity government in Sudan will signal the end of Africa’s longest-running civil war and the success of two years of negotiations between the central government and the Sudan People’s Liberation Movement (SPLM) led by John Garang.

“This peace agreement will change Sudan forever. Sudan will never be the same again, because this peace agreement will engulf the country in a democratic and fundamental transformation,” Mr. Garang said at the signing of the accord in Kenya in January. He is expected to be sworn in as first vice president at a ceremony this weekend in Khartoum, making him the first southerner to hold this position since Sudan’s independence from British rule in 1956. Mr. Garang was last in Khartoum in 1983.

Meanwhile, Muslim Leader Hassan al-Turabi is out of detntion attacking the new Constitution:

Islamist leader Hassan al-Turabi has launched his fiercest attack to date against Sudan’s new interim constitution, due to be signed under a north-south peace deal.

Turabi, who was President Omar al-Beshir’s one-time mentor and only freed last week after 15 months in detention over an alleged coup plot, said it was drafted undemocratically.

The interim constitution was written by a committee “that was not representative of the Sudanese people,” Turabi told a crowd of some 5,000 people late Wednesday in his first public rally since being freed.

He also joked that the president may need the second vice president so that together they can crush Garang.