Not your “everyday scuffle” with police,
this protest looks more like a scene from “Braveheart”. 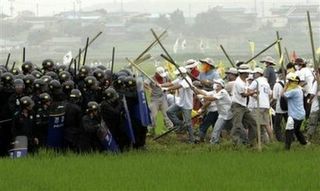 A huge protest in South Korea ended violently as hundreds of protesters rallied against the planned move of US military personnel to the area:

Some 7,000 demonstrators threw steel pipes and stones at about 10,000 police guarding Camp Humphreys in Pyongtaek, about 50 miles south of Seoul. Some demonstrators were seen bleeding but the number of injured wasn’t immediately known.

“The government made an agreement with the United States without consensus from the residents,” said one protester, Oh Jeong-sun, 56.

The U.S. military in South Korea is now headquartered at Yongsan Garrison in Seoul, but is set to move its entire command to Pyongtaek by 2008 as part of plans to consolidate bases and reduce the number of U.S. troops.

About 32,500 American troops are now deployed in South Korea, but that number will eventually drop to 24,500. 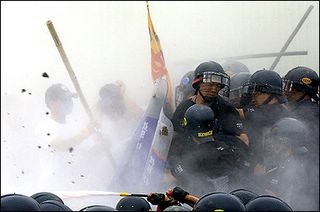 Thousands of protesters turned out for the rally against the planned move of US military personnel to the area.

Meanwhile, South Korean Deputy Foreign Minister Song Min-soon said on Monday that, “Providing aid to stabilize the regime (North Korea) and develop its economy could help the North to give up its nuclear programs”.

Maybe the answer is just to pull them all out? Hmm.