Asked what “claim” he had against Bush, Arutyunyan answered: “Serve your Bush faithfully. Maybe you’ll get an award for it.”

He made an obscene gesture at the camera during an interview today. The suspect “did not aim to kill the presidents but deliver a huge blow to Georgia’s international reputation and the prestige of our country. Thankfully, with God’s help, it did not happen.” 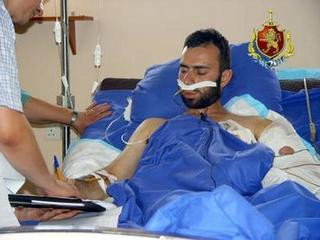 Vova Arutyunov (that is how they are spelling his name… now), 27, opened fire on the police when they came to his house to question him.

Mr Arutyunov shot dead one of the policemen before escaping from his flat in the Tbilisi suburb of Vashlisdzhvari.

He fled to a nearby wood, firing shots as the police encircled him until he was finally captured two hours later and taken in for questioning. Interior Minister Vano Merabishvili told reporters that he was wounded.

Georgian officials have announced that he has been arrested for the crime in May. The Russian-made explosive device, folded in a red handkerchief, failed to go off. A Georgian security officer reportedly picked it up and removed it from the area:

Interior Ministry spokesman Guram Donadze today released a short police video of a conversation that he said he had in hospital with Arutyunian. In the video, broadcast on Georgian television channels, the suspect admits to throwing the grenade with a view to harming Bush.

In earlier comments made to Georgia’s Rustavi-2 television channel, Deputy Health Minister Irakli Giorgobiani had quoted hospital doctors as saying Arutyunian had confessed to throwing the grenade. But Giorgobiani had also cast doubt on the suspect’s mental health.

Georgian television footage today showed explosives and detonators, as well as chemical substances that could possibly serve to make a bomb, that were reportedly seized at Arutyunian’s home. Investigators also found electronic equipment and military literature.

Georgian media have described Arutyunian as an unemployed man who lives alone with his widowed mother. Neighbors describe him as a recluse.

Several neighbors of the attacker will collect the reward:

Several people, whose identities remain confidential, helped the investigators in capturing a suspect in the Bush grenade throwing incident by providing information about the suspect’s identity. As a result, a 150,000 Lari (USD 82,000) bounty, announced by the Interior Ministry for information, will be distributed among an unspecified number of citizens.

During the Bush visit security at the event was high with sharpshooters posted on rooftops around the square and guards checking those who entered the area.

But a gap in security occurred shortly before the speech when crowds broke through police barriers to get a place on the square.

Jim Hoft
Jim Hoft is the founder and editor of The Gateway Pundit, one of the top conservative news outlets in America. Jim was awarded the Reed Irvine Accuracy in Media Award in 2013 and is the proud recipient of the Breitbart Award for Excellence in Online Journalism from the Americans for Prosperity Foundation in May 2016.
President Trump Gives Permission for US Troops to Stay at Trump Hotel in Washington DC
For “Open Borders” and Censorship of “Hate Speech” - The EU funded Open Society NGOs with over $35 Million 2019
The Same Party that Stole Military Votes in Michigan and Georgia -- Is Now Forcing Military Men and Women to Sleep on the Floor in a DC Parking Garage
They Don't Want the Truth to Come Out: Senate Democrats File Ethics Complaint Against Senators Cruz and Hawley for Challenging Election Fraud
OANN: Michelle Malkin, RSBN and Gateway Pundit Suspended on Twitter for Violating New Orwellian "Civic Integrity" Rule (VIDEO)
See more...