THIS VIDEO posted by Trey Jackson from Jackson’s Junction is a likely indicator of what we can expect from Senate liberals in the coming battle for the open Supreme Court Seat. 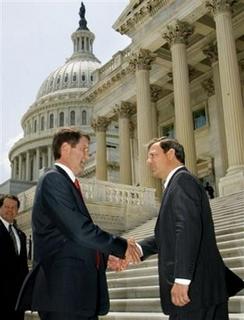 (as seen on Hannity and Colmes)

“Some [of his questions] I totally disagree with,” Hatch of Utah said. “Some I think are dumbass questions, between you and me. I am not kidding you. I mean, as much as I love and respect you, I just think that’s true.”

A stunned Schumer asked if he heard the chairman correctly, to which Hatch said yes. Again, Schumer asked Hatch if he would like to “revise and extend his remark,” congressional speak for change his mind.

In the above photo Senator Frist (R-TN) pledges support to Judge John G. Roberts today outside of the Capital Building.

Instapundit adds that we can count on dumba$$ questions like Schumer’s.