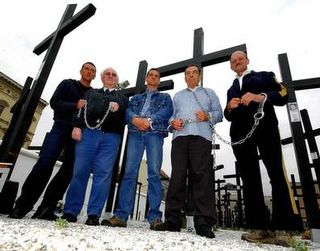 Victims of Communism plan to chain themselves to the Checkpoint Charlie Monument in Berlin, Germany today, so that the government does not bulldoze the monument down.

German conservative Davids Medienkritik has been reporting on the planned demolition of a Checkpoint Charlie Monument in Berlin. The monument is planned for demolition at 4:00 AM today so as not to attract much attention. However, the Berliners didn’t plan on the uproar that has been building.

As Americans set off fireworks to celebrate independence and freedom tonight, a different scene will play out half-way around the world in Berlin. There, at the site of Checkpoint Charlie, where Americans stood guard for so many decades and confronted Communist tyranny, workers with heavy equipment and machinery will descend to tear down over 1,000 crosses, each individually dedicated to those murdered attempting to escape Communist dictatorship for freedom.

The planned demolition, intentionally scheduled for 4:01 AM to minimize visibility and public outrage, could develop into a massive public relations nightmare for the city of Berlin. A group comprised of victims of Communist violence has announced that they will chain themselves themselves to the crosses of murdered family members and friends before they see the city take them down.

There is much more at Davids Medienkritik.

You can help by emailing the German Bank BAG HERE. The monument rests on the bank’s land.