CHEMICAL ALI IS QUESTIONED ABOUT HIS ROLE IN WAR CRIMES,
VIDEO HERE

(Taken during his pre-trial hearing in December)

“Chemical Ali”, one of Saddam’s loyalists,… no longer so loyal! 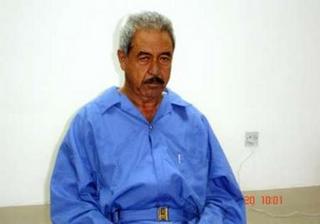 Saddam’s closest allies, friends and relatives from his deposed regime are turning against him:

Saddam Hussein’s half brother Barzan al-Tikriti and his cousin Ali Hassan al-Majid (“Chemical Ali”) have made statements incriminating the former dictator during preparations for the trial against him and former aides, the examining judge said, according to the al-Sharq al-Awsat on Monday.

The former Iraqi foreign minister, Tariq Aziz, had also incriminated Hussein in a statement, the magistrate Raed Jouhi told the Arab daily in an interview.

Six of Saddam’s closest associates were questioned about their roles in the genocide of Shiite’s, Kurds, and Marsh Arabs:

In the incomplete audio accompanying the pictures, the judge’s questions were largely confined to details of the detainees’ posts under the ousted regime.

But an attached statement said all six were questioned about their role in the murders of thousands of members of a Shiite religious party by the Sunni-dominated secular regime.

Samarrai was also questioned about his alleged role in expulsions and killings of Shiite Kurds of Diyala province’s Fayli community.

Chemical Ali faced questions about the suppression of Shiite resistance in the marshes of southern Iraq following the 1991 Gulf war.

Barzan Ibrahim Hassan Al Tikriti, the half brother of ousted Saddam Hussein sits before a judge in video released yesterday.

On Monday, in response to Saddam’s lawyers, Sweden declined the request to change the Saddam trial venue:

Sweden yesterday turned down a request from Saddam’s lawyers to change the venue of his trial to the Scandinavian country or allow him to serve any prison sentence there.

“We have said ‘no’,” justice ministry director Ann Marie Bolin Pennegaard said, referring to a request from one of Hussein’s lawyers, Giovanni di Stefano.

“One couldn’t stop an Egyptian ambassador from recently being kidnapped and murdered in Baghdad. And there is a war going on there. How can one hold a trial when bombs are exploding outside the door?” he asked.

The people of Dujail, a small Shia village north of Baghdad where a mass killing of local inhabitants took place 23 years ago under the regime of Saddam Hussain, say they want the ousted dictator hanged.

Iraqi Expat has more on the “Saddam Sellout”. He also notes that “Badboy” is still a wanted man.