** How would Americans react to a foreign journalist meeting with Osama bin Laden or Abu Masad al-Zarqawi in a “secret” hiding place, interviewing him, and then posting the video up on their website? **

ABC uses the “Freedom of the Press” excuse to explain their “Nightline” interview with the mastermind behind the Beslan Massacre, the Moscow Theatre Massacre, and countless other terrorist attacks in Russia! 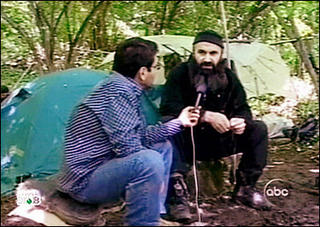 Basayev shares with the cameraman as Russian children are shown running from the besieged Beslan school after bombs started exploding during their three days of hell.

As Americans blast Al Jazeera for broadcasting Osama Bin Laden or Al Zarqawi tapes and videos, including beheadings, one of the big three networks from America goes to the backwoods of Chechnya and interviews directly, Shamil Basayev, leader of the Chechen terrorists.

“This fact cannot but cause indignation,” he said.

It was also confirmed just today that Basayev was behind a village attack on July 19th killing 14 officers and his involvement in Beslan has now been proven. 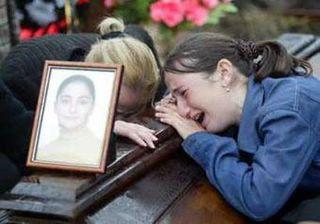 Russia’s foreign ministry summoned the senior US diplomat in Moscow and expressed “strong indignation” over an interview aired on the ABC television network with radical Chechen rebel leader Shamil Basayev.

Daniel Russell, who as charge d’affairs heads the embassy in the current absence of a permanent ambassador, was called in to hear “strong indignation with the fact of the airing of the Basayev interview,” a ministry spokesman told AFP.

Basayev, a veteran guerrilla commander in Chechnya’s decade-old separatist conflict with Russia, has claimed responsibility for several large-scale attacks on civilians, including last year’s bloody mass hostage-taking at a school in Beslan, near Chechnya.

In his interview, thought to be the first face-to-face meeting with a journalist in years, Basayev said he had turned to terrorism because Russia was killing so many Chechen civilians. (at least it wasn’t Iraq!) 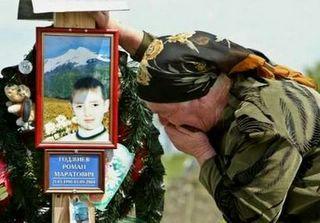 The interview was reported on ABC’s “Nightline” last night!

More than 320 people – around half of them children – were killed in the attack at the school in September.

Russia is offering $10m (£6m) for the capture of the warlord, who it also accuses of several other major attacks.

The interview with Shamil Basayev – recorded at his hideout in Chechnya – was aired on ABC’s Nightline programme.

“It’s not the children who are responsible,” Basayev said. But he added: “Responsibility is with the whole Russian nation… If the war doesn’t come to each of them individually, it will never stop in Chechnya.”

Russia is asking the US Congress to help stop the media attention given to international terrorists . AMEN!

** “Nightline” still has the video up on their page here. **

Update: (Saturday PM) The Great Lori Byrd at Polipundit is linking to this news story and has another horrific account of the Beslan Massacre with her posting.