** Reuters blames Israel for Palestinian shooting in a Hospital in Gaza!!! ** 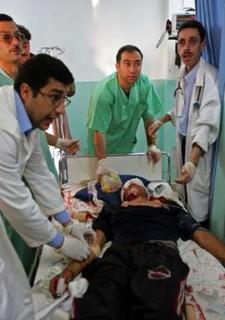 Here is what Reuters said about the shooting:

Palestinian medics treat a youth, wounded in clashes between Israeli troops and Palestinian youths, in a local hospital in the West Bank village of Salfit on July 15, 2005. Israeli helicopters pounded targets in Gaza on Friday after a deadly Palestinian rocket attack that sparked fierce internal fighting between militants and Palestinian police trying to stop further barrages. REUTERS/Laszlo Balogh

But, Al Jazeera has a different story:

Families of the casualties were outraged by the violence and armed relatives fired shots inside Shifa hospital before Palestinian police moved in to restore order.

Get that… “families of casualties…”

That is how Al Jazeera described it! You would think that if it were Jewish youth shooting that Al Jazeera would be the first to broadcast it!

Looking further… Reuters news version of the event has the same story as Al Jazeera:

The Israeli air raids, the most intensive since a ceasefire was declared five months ago, caused no casualties, but two Palestinian bystanders were killed in the heaviest gunbattles in years between Palestinian security forces and Hamas fighters.

“Outraged relatives of the victims fired guns into a local hospital.”

The AP reports here on the casualties from the Jewish attacks and Palestinian faction fighting:

Friday’s clashes came just hours after a rocket fired from Gaza killed an Israeli woman and Israel retaliated with helicopter missile strikes on several targets in Gaza. On Friday morning, six more rockets hit in and around the Israeli border town of Sderot, causing no injuries.

Some of the wounded were rushed to hospitals in private cars. One young man, his shirt bloodied, was carried away by a group of people. A teenager and a child were killed in the fighting, hospital officials said, adding that the victims’ exact ages were not immediately available.