Democracy protests heat up against the all-powerful King of Kathmandu. 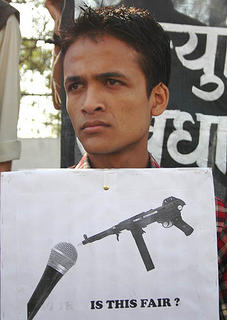 Journalists protested in Nepal Friday to demand freedom of the press and freedom of expression. The journalists have held numerous protests since the February 1 ban by the government:

Around 49 FM radio stations were broadcasting news all over the country, but the new laws that closed most of these left 1,000 journalists jobless, according to the Save Independent Radio Movement.

The king has removed the multi-party government, suspended civil rights and imposed severe restrictions on news reporting, all on the pretext of national security in light of the ongoing, deadly Maoist rebel uprising.

OhmyNews International has a great piece on the current situation in Nepal. 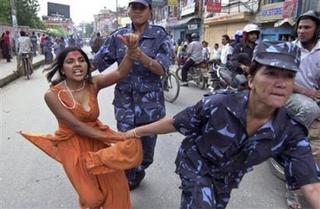 Students protested at their college in Kathmandu on Friday demanding the return of civil rights and democracy in this Himalayan kingdom.

Some 400 protesters gathered in the Kathmandu, the capital of Nepal to protest recent ruling banning the unions in government offices:

The protestors, mainly members of the Government Employees Organisation (NGEO), gathered at the Sundhara locality in Kathmandu before marching through the streets denouncing changes effected to the Civil Service Act enacted last week.

“The ordinance has attacked the civil servants’ right to organization,” a leaflet handed out by protestors said.

A large number of riot police monitored the march and confiscated the posters they were carrying. 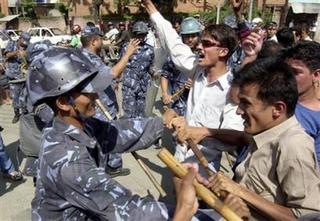 Police used wooden “batons” to break up a protest in Kathmandu on Sunday, July 24. 15 demonstrators were injured.

About 400 supporters of Prime Minister Sher Bahadur Deuba were rallying outside the Royal Commission for Corruption Control, waving flags and chanting slogans against the king, who seized absolute power in February and fired Deuba.

The skirmishes began when police moved in to clear the protesters because they were blocking the street.

They used batons to beat the protesters, injuring about 15 of them. Many more had cuts and minor bruises.

Protesters retaliated by pelting police with bricks, injuring at least 10 police officers, said a policeman at the scene who declined to be named. 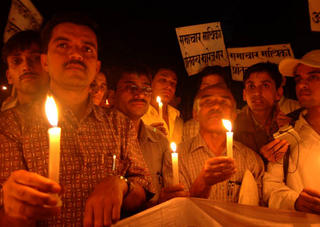 United We Blog for a Peaceful and Democratic Nepal has more on the government worker protest this weekend.
And United We Blog has more here on the latest battering of protesters.