Protesters Thrashed by Thugs in Egypt

It was a brutal scene at this Egyptian protest today. 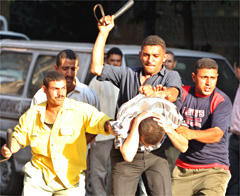 Police and Egyptian government supporters beat dozens of opposition activists with batons, sometimes kicking them as they lay on the ground, during a protest Saturday against President Hosni Mubarak days after he announced his bid for re-election promising greater democracy in Egypt.

Several hundred men and women were still gathering to begin their march toward Cairo’s main square when men in plainclothes descended on them, swinging billy clubs and assaulting the demonstrators.

Circles of burly government supporters surrounded activists sprawled on the pavement, kicking them in the head and ribs and tearing at their clothes. Others lifted protesters in the air by the arms and legs, hauling them off to police trucks. One elderly man wandered in a daze, his head bleeding. 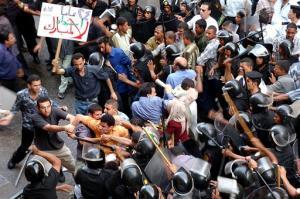 Pro-reform activists were clubbed by police for nearly an hour in the scuffle:

Opposition groups were gathering to stage a demonstration in Cairo’s main Liberation Square two days after Mubarak announced he would run for re-election in a Sept. 7 vote.

The election will be Mubarak’s first in which he faces an opponent, and his government has touted it as a launching pad for greater democracy. The United States also praised the elections, though Mubarak opponents are more skeptical.

The scuffles lasted for about an hour, and an Associated Press reporter saw least 15 protesters being beaten. 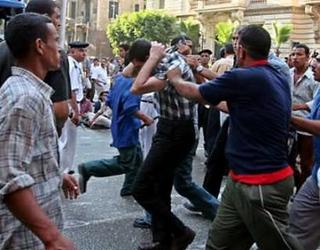 Opposition leaders were briefly held by police after the attacks:

Egyptian security briefly detained senior members of the opposition Kefaya (Enough) Movement on Saturday during a protest against the nomination of President Hosni Mubarak for a fifth 6-year presidential term.

The protest, during which police beat protesters with batons and manhandled journalists, comes a day after Mubarak submitted his nomination papers to stand in Egypt’s first multi-candidate presidential election.

“Five of the people from Kefaya were released … Those released include Kamal Khalil, George Ishak and Amin Iskander,” a police source said without giving further details after nearly 30 people were detained. 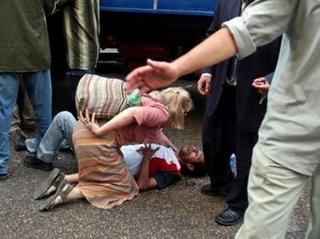 Protesters were kicked by the thugs after they had fallen to the ground.