Russian police today are reporting that they have prevented a major terrorist strike planned on Moscow:

“A man was preparing to perpetrate a terrorist act in Moscow and we managed to stop him. About 150 accomplices, including policemen, civilians and clerics, were detained,” he said. 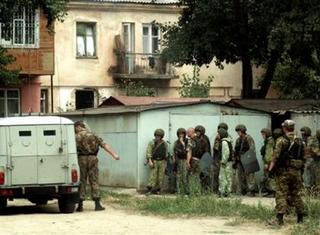 A large weapons cache was discovered in Dagestan earlier this week:

“The cache consisted of 123 122mm artillery shells and 130 detonators,” the spokesman said. “The stockpile was destroyed by military specialists.”

An explosive device, with power equivalent to 10 kg of TNT, was found on the Makhachkala-Krasnoarmeysk highway 100 meters from a bridge. “If the criminals had managed to activate this, there would have been more casualties,” he said.

The radio-controlled, homemade explosive device consisted of a 10-liter metal bucket stuffed with a mixture of aluminum powder, ammonium nitrate, and pieces of metal, sealed with polyurethane foam and resin, with wires leading out of it.

Dagestan, which has seen nearly 80 terrorist attacks so far this year, is an impoverished region neighboring Chechnya, where the fighting between government forces and separatist rebels has spilled over into nearby regions.

And, police arrested the suspected train bomber this week in Dagestan. The attack killed one female passenger. Explosives similar to the ones used in the attack were found in the attacker’s home.