But, the BBC reports a different story! 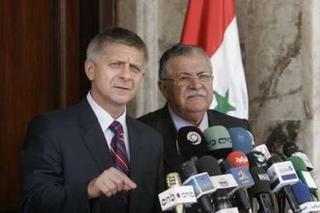 Polish President Marek Belba on a surprise visit to Baghdad, committed his military contingent to stay put in Iraq:

Visiting Polish Prime Minister Marek Belka said his country was determined to keep its military contingent of around 1,400 troops in Iraq.

“We are determined to maintain our military contingent in Iraq,” Belka told reporters in Baghdad after meeting with Iraqi premier Ibrahim Jaafari.

He said in the future troops might focus on training missions, once stability returns to the war-torn country.

“The characterisation of the military may change from the present stabilisation mission to a training mission,” he said.

Poland has the third largest contingent in the US-led coalition, with 1,400 troops in Iraq, and commands a multinational force of some 4,000.

“We in Poland know what challenges are ahead in Iraq and we are proud to contribute (to the) stabilisation of Iraq,” Belka said.

“We are determined to participate in the economic development of Iraq and our meeting today was mostly devoted to this issue.”

But the BBC puts a different spin on the story. In fact, they barely mention the troop commitment at all in their article. You are left with the feeling that Poland is bailing out of Iraq because things are too tough there and at home! But, what the Polish Prime Minister states is just the opposite. Here is how the BBC put things:

The Polish government has been a staunch supporter of the US-led coalition in Iraq.

However, the policy is now unpopular with the public and it no longer has the funds or soldiers to sustain it.

Even though much of the public originally supported the idea of sending troops to Iraq opinions have now changed.

Many of the expected economic and political benefits have not materialised. And now the overwhelming majority of Poles want the soldiers to come home.

Most Poles are still probably more concerned about domestic issues like high unemployment and corruption than Iraq.

But the Madrid and London bombings served as an awful reminder that Polish cities could also be targets – although the government says it has no reports that suggest a heightened threat.