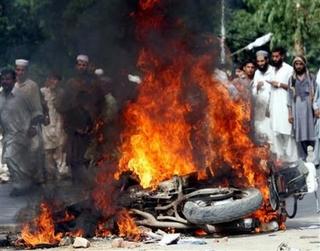 Madrasa students, upset with the clamp down on Islamic Militants in Pakistan, burn up a police moter bike. (AP)

A senior cleric urged his followers to join him on a peaceful protest rally in Pakistan today:

Ahmad said no terrorists were arrested in the raids on Islamic schools, or madrassas, and mosques, and demanded the immediate release of all detainees. 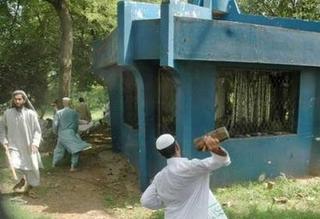 (Maybe he was having a difficult semester?)
A madrasa student throws a brick at a police post in reponse to a crackdown on Islamic Militants in Pakistan. The students were protesting the unfair detention suspected militants in Pakistan since the July 7 London bombings.

Some shouted slogans in support of al Qaeda leader Osama bin Laden and Afghanistan’s fundamentalist Taliban government, which was overthrown by U.S.-led forces after the al Qaeda attacks on U.S. cities on Sept. 11, 2001.

Up to 700 Islamists, most of them teenagers or in their 20s, chanted anti-Musharraf and anti-U.S. slogans at Islamabad’s Lal or Red Mosque, which was raided by security forces searching for militants on Tuesday. 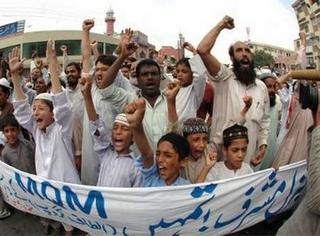 Madrasa students take a break from classes to join their mentors at an Anti-Clamp-Down rally. (Reuters)

Reporters said that the planned rallies “fell flat” (not exactly the language I would use!):

An Islamist call for nationwide protests in Pakistan against a crackdown on militants after the July 7 London bombings fell flat on Friday with rallies in big cities failing to attract more than a few hundred people.

More than 300 militant suspects have been detained across Pakistan since revelations that three of the four London bombers were British Muslims of Pakistani origin who had visited the country before the attacks.

The protesters pelted a police post with stones, destroyed lamp posts and set fire to a police motorcycle.

The protests followed a televised address to the nation by Musharraf on Thursday night in which he called for a holy war against preachers of hate and announced steps to rein in militant madrasas and groups seen as having influenced the London bombers.

In his television address, Musharraf said all madrasas must register with authorities by December.

Update: Captain Ed is wondering what’s up with the low turnout?

“More people show up here at the opening of a Krispy Kreme donut shop!”

But remember… It’s not the number of donuts in the box, it’s the jelly in the middle!