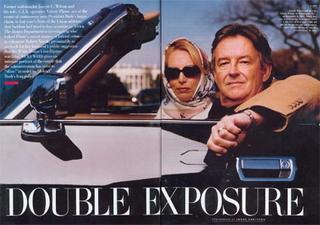 The liberals are absolutely correct! Someone ought to go to jail for this!
And,… it ought to be Joe Wilson!

to insist that the president was talking about “Joseph C. Wilson IV from the Washington D.C area” is one thing. But then to write a screwball piece in the New York Times ( good old’ #6 of course! ), and outing his wife as a CIA “Agent” in the process is another. And all of this after a government paid trip to Africa! How ungrateful! Arrest him!

As confusing as this story is to understand (since the democrats are frothing at the mouth over their slander against Karl Rove) you need to turn to Ann Coulter today to explain it all in her column this week.

But the part that may prove most salient in the U.S. is that, like the Senate Intelligence findings, the Butler report vindicates President Bush on the allegedly misleading “16 words” regarding uranium from Africa: “We conclude also that the statement in President Bush’s State of the Union Address of 28 January 2003 that ‘The British Government has learned that Saddam Hussein recently sought significant quantities of uranium from Africa’ was well-founded.”

We’re awaiting apologies from former Ambassador Joe Wilson, and all those who championed him, after his July 2003 New York Times op-ed alleging that Mr. Bush had “twisted” intelligence “to exaggerate the Iraqi threat.”

Maybe in the sequel to this African story we’ll get to see Redford thrown in the slammer while his wife drives off in the convertible! Let’s hope!

Update: Is it a prerequisite to be either “stupid or deceitful” to be a leftist writer?

Richard Cohen today writing for the Washington Post tries to do his damage. He grabs your attention by absolving Karl Rove, but then repeats the same leftist lies that we have heard since Saddam was getting his eardrums rung by bunker busters:

But I do have to concede that he probably did not set out to expose a CIA operative, the by-now overexposed Valerie Wilson (nee Plame), a specialist in weapons of mass destruction…

…It was Plame, administration sources told columnist Robert D. Novak and others, who chose her husband to go to Africa to see if Saddam Hussein’s Iraq had tried to buy uranium in Niger. He went and later said that he found nothing, but George W. Bush said otherwise in his 2003 State of the Union address. It was supposed to be additional evidence that Iraq had, in the memorable word uttered by Vice President Cheney, “reconstituted” its nuclear weapons program. That, of course, is the real smoking gun in this matter — the crime, if there is one at all, in what should now be called Karlgate.

Do liberals read any reports at all? Don’t you think that Richard Cohen would have read the Butler Report? How many times do you have to replay those 16 words for a liberal before they see “British”? When did “British” start including anyone within 20 miles of Washington DC?

Once again, “Stupid or deceitful” because it is one, baby. It is definitely one!

I don’t write for the Washington Post but I bet I could come up with better facts than this paid clown!

Update 2: More lies from the MSM regarding Wilson. This one is just sickening from Bloomberg.com !

The main points of Wilson’s article have largely been substantiated by a Senate committee as well as U.S. and United Nations weapons inspectors. A day after Wilson’s piece was published, the White House acknowledged that a claim Bush made in his January 2003 state of the union address that Iraq tried to buy “significant quantities of uranium from Africa” could not be verified and shouldn’t have been included in the speech.

While the administration was justified at the time in being concerned that Hussein was trying to build nuclear weapons, “on the specifics of this I think Joe Wilson was right,” said Michael O’Hanlon, a scholar of foreign policy studies at the Brookings Institution in Washington.

The article gets worse… once again why does the left think that British mean Joseph Wilson? That piece sure is infuriating.

Here are the addresses for the writers for this twisted article:

These hacks should have consulted this site before they wrote their science fiction.