* Protesters shout, “We Want Democracy!” at rallies today in Nepal! *

At least 40 individuals were injured as police charged
into the student demonstration! 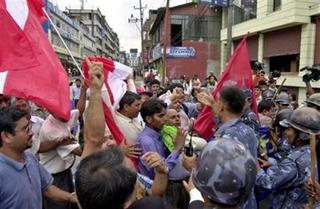 And, later in the day another protest 0f 2,000 demonstrated in the streets of the capital:

Police broke up a demonstration Tuesday in Nepal’s capital by hundreds of students protesting the king’s seizure of absolute power, injuring at least 36, witnesses said. Four policemen were also hurt.

In a separate rally later in the day, about 2,000 political leaders and supporters demonstrated in the streets of Katmandu after police blocked them from a scheduled rally at the Royal Nepal Academy.

The first demonstration was organized by student groups affiliated with the country’s seven major political parties, which have banded together to protest King Gyanendra’s power grab earlier this year.

About 500 students blocked a key street Tuesday when police charged at them with batons. The students retaliated by throwing stones, witnesses said. 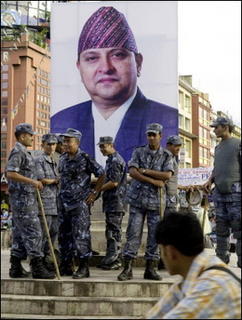 At the Royal Nepal Academy later, police locked the main entrance and formed a line to prevent former politicians from entering the premises for a rally against the king’s power grab. Minor scuffles broke out, but there were no injuries reported.

“Down with autocracy. We want democracy,” chanted the demonstrators.

The Khaleej Times has more on the protest saying that the student protesters were severely beaten:

Six people were injured in Nepal on Tuesday when police broke up a protest staged to demand the release of student union leaders arrested for opposing a government order to print photographs of the king in text books.

“It was like a battlefield. Some of the students were profusely bleeding after police beat them,” Kathmandu taxi driver Bhagawan Chhetri said. “The students then threw stones at cars before being chased away by police.”

Police in the Nepali capital said six of the roughly 200 demonstrators were hurt and dozens were detained.