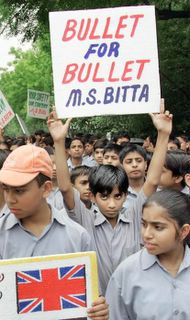 Children in India pass an idea to London officials…

Another week, and numerous Islamic terrorist attacks, not just in London, but across the globe…

So,… what is the world to think? And why is it news that Muslim groups would be concerned for their own safety? And once again, the world is wondering where the outrage is in the Muslim community?

And how should we Western Muslims respond? Should we cry discrimination? Should we remind our fellow citizens that we are just as English or American or French or Australian as they are?

Or should we appreciate their fears and uncertainties? Should we empathise with their feelings of vulnerability as they feel besieged by what appears to be yet another attack by extremists using our faith (pdf file 1.62MB) as an ideological weapon?

When western citizens are kidnapped by extremists with Muslim-sounding names, the reputation of Islam is hijacked.

Crossroads Arabia has the Saudi’s response to the London attacks.