What say you, Mayor Ken Livingstone? 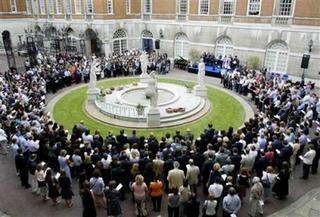 Doctors, religious leaders, and members of the public gathered for a service at the British Medical Association in London for those who died in the 7-7 terrorist blasts , today. (AP)

At midday the London “tubes” were evacuated after up to four explosions went off.

A man was seen fleeing the scene:

No one was reported injured in the blasts that caused major disruption and shook the nerves of an already jittery city.

Witnesses said they had seen what could have been a would-be bomber running away after dropping a rucksack on one of the trains.

“We all got off on the platform and the guy just ran and started running up the escalator,” one witness who gave her name as Andrea told the BBC.

“Everyone was screaming for someone to stop him. He ran past me … and he ran out of the station. In fact he left a bag on the train,” she said.

Athena has more.
Michelle Malkin is all over it.
Instapundit on Blair and Howard’s press conference.
La Shawn Barber
Wizbang