These Iraqis living in Denmark know a terrorist attack when they see one! 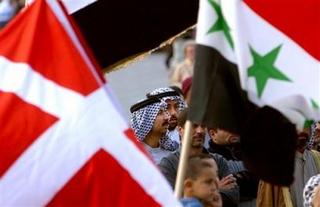 Iraqi and Danish flags fly over an Iraqi protest in Copenhagen. The Iraqis were protesting against the terror attacks in London and Iraq.

Where else in Europe would you see the Iraqi flag flying next to the host countries flag at a demonstration?

On Friday the Iraqis living in Denmark weren’t hiding their admiration for the country they now call home. In a demonstration against “terrorist attacks in London and Iraq the Danish and Iraqi flag flew in the same breeze. These demonstrators know how to spot terror attacks better than the mainstream media!

The Danes believe that they may be a target for terrorism, but as you look at reality and the blasts of this morning, is there any place that is free from a terrorist attack today?

Denmark knows that its support of the US in Iraq and Afghanistan may make them a terrorist target:

Fears of a terror attack in Denmark, a staunch supporter of the American-led coalition in Iraq, are increasing after Islamic extremist groups targeted the small Scandinavian country and bomb scares have led to heightened security.

The London bombings were “a warning to all European countries, but first and foremost to Denmark, which still has soldiers stationed in Muslim countries,” the Abu Hafs al-Masri Brigades, a terrorist organization linked to the Madrid train attack, announced in an Internet posting. The al Qaeda-linked group that took responsibility for the London attacks had previously threatened Denmark and Italy. 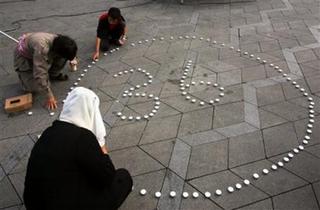 Denmark Iraqis place candles on City Hall Square in Copenhagen, Denmark, Friday July 22, 2005, in the shape of the number 36 to commemorate 36 children killed in a recent attack in Iraq. (AP)