Michael Moore made his first appearance on the “Tonight Show” since the election last November. It looks like he is suffering from some form of “Al Gore Election Loss Syndrome” in reverse.

This form of Post Election Depression makes you go from unkempt to clean-cut rather than the reverse. 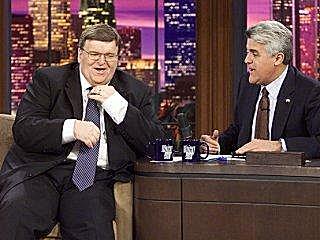 Michael Moore sports a new look for his “Tonight Show” appearance this week. He must think he has monkey arms with the length on that white shirt. Maybe he’s sensitive about his wrists? It makes you wonder if he’s wearing white socks?

via Appalachian Gun Trash (what a great blog name!)
via Iowa Voice

Who adds “You’d think with the money he made on that hunk of crap, ‘Fahrenheit 9/11’, he’d be able to afford a decent tailor!”

And, speaking of Michael Moore and suits:

A Michael Moore “slander suit” by the brother of Oklahoma City bombing conspirator Terry Nichols was tossed from court this week.