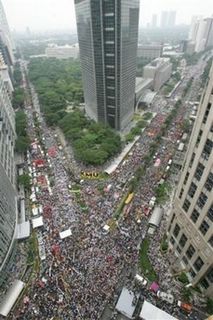 Thousands rally in Philippines to push for the resignation of Gloria Arroyo.

A massive protest march was held today in the financial district of Manila urging President Goloria Arroyoy to step down:

Around 30,000 people have marched in the Philippines capital Manila, calling on President Gloria Arroyo to quit.

It was the biggest demonstration against Mrs Arroyo since she started facing calls to resign over allegations of vote-rigging in 2004 elections. 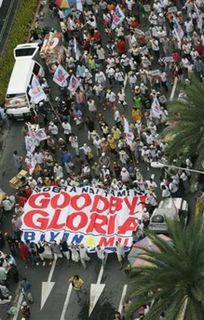 Crowds gather in the Philippines today.

The protest in Manila’s financial district forced a long walk on many brokers and office workers:

The main avenue in Manila’s Makati district was closed to traffic early Wednesday, forcing stock exchange traders and office workers to walk to work past small groups of protesters massing ahead of the mid-afternoon rally.

The anti-Arroyo forces are pinning their hopes on a turnout of up to 50,000 to force the resignation of Arroyo over allegations that she tried to fix last year’s election. 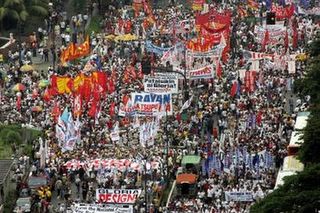 A protest in the Philippines today urging President Gloria Arroyo to step down.

The size and frequency of the rallies seems to determine Arroyo’s chances of staying in office:

A huge protest promised by Philippine opposition groups built slowly on Wednesday, with its size and staying power seen as a barometer of President Gloria Macapagal Arroyo’s chances of survival.

At least 10,000 people, mostly young men, were converging at a major intersection along Ayala Avenue, an eight-lane artery which cuts through Manila’s business and diplomatic district.

“I want Gloria to resign because I think it’s good for the Philippines,” said graduate student Ernesto Lina. “She’s a cheater and she’s not done well for the people.”

Analysts have said a crowd above 20,000 may signal rising rage against Arroyo over allegations of poll fraud and put her on the back foot after a former president came to her rescue last week and the Catholic Church did not join calls on her to quit.

Organizers said the crowd would swell over the day to 40,000 or 50,000 — a big step up from recent rallies of around 8,000 but far from the hundreds of thousands who took to the streets of Manila to overthrow presidents in 1986 and 2001.

But analysts said Arroyo, a U.S.-trained economist and the daughter of a late president, would not be under immediate threat unless protests grew larger and more frequent.

Update: The “Great One”, Glenn Reynolds, the Instapundit, is running this news. John Marzan at Philippines Politics ’04 is all over the Gloria Arroyo story.