Pop-n-Politics needs to have a critical discussion about the problems with aid and other barriers to Africa’s development. 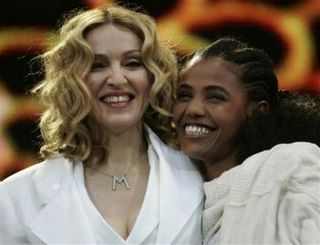 It was fitting that Madonna would sing “Like a Prayer” hand in hand with Birhan Wohdu at “Live8” in London. It was lots of prayer, hope, and help by Brian Stewart the photographer of Birhan in 1984, that is behind Birhan’s success… Not “Live Aid” from 20 years ago. Today Birhan is the picture of a hopeful, reviving Ethiopia.

“She had 10 minutes to live 20 years ago. Because of Live Aid 20 years ago, because we did a concert in this city and in Philadelphia, last week she did her agricultural exams in the school she goes to in the northern Ethiopian highlands. She is here. Don’t let them tell you that this doesn’t work. Look at this beautiful woman.”

But, in reality it is the photographer of this famous shot in 1984 that made Birhan the “Face of Famine in Ethiopia” and who has helped provide for her and her siblings all of these years.

Birhan’s image in the CBC video, put together by editor Colin Dean as his personal memorial to victims, helped set off the greatest surge of humanitarian giving in world history, not equaled since.

In 1988, four years after by my last sight of her, we launched a major search, using photos and village contacts. The odds seemed hopeless.

Then we got word, and at a feeding centre we saw the unmistakable face of Ato Woldu and his daughter, Birhan, now seven.

Life had been hard. They’d been forcibly moved around by the Marxist regime throughout drought and war. I arranged some schooling and local help.

But given the escalating war and Tigray’s extreme isolation, it proved nearly impossible to keep in touch. Messages were sent and never arrived. Birhan appeared lost yet again.

With the fall of the Marxist regime in the early 1990s, peace returned. Then word came from Tigray. Birhan was safe.

In 1995, a decade after the famine, I was able to really establish the friendship with the family that has endured ever since. Then our talk was full of hope:

“I barely survived death but came through,” she said. “And today when I see so many beautiful things. I’m grateful to be alive. Always I say I could have been just dust by now, but I’m not. I’m alive to see beauty around me, and to see new things. I’m very happy.”

It all changed when the famine’s 20th anniversary unleashed a media cyclone. A new generation of rock stars has remade the Band Aid Song, after watching, many for the first time, the famous CBC video and Birhan’s image.

“She has no idea who Bob Geldof was or who these people are or why is she meeting them all this. She didn’t have any idea,” Mesfin says. “She started to realize that she is having a lot of responsibility, why she has been chosen to meet these big people. I mean this was the real moving attention and an alarm for her. A wake-up call, yeah, that she is, like, a real symbol of hope.”

The British tabloids, a world unto themselves, have just discovered, this year, that Birhan is “alive” and even claimed, bizarrely, to have just “found her.”

For two weeks Birhan is whisked through a celebrity tour in London. As a “discovery” she was raced to meet Geldof and Prime Minister Tony Blair.

Then as international fame spreads, she comes to Chicago where in a surreal moment she jumps in the Oprah Winfrey show’s stretch limo on the way to a taping.

She still plans to be a nurse among poor children in Ethiopia.

But as she heads home I know her legend is expanding there, too, and will always follow her. We talk of the strange events that have linked for 20 years and wonder about her future.

“My life in the future will, I think, be an ordinary life but I really cannot say now for sure what sort of life I’m going to have because only time will reveal that for me,” she says.

In parting again, I comfort myself that her message of hope is needed today. I sense she has the serenity and courage needed to face strange new challenges in the life that she once just barely clung on to.

A beautiful young woman, Birhan is the spokeperson for “Live8” but there is more to the story… 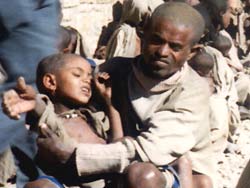 Birhan in this 1984 film shot by photographer and family savior, Brian Stewart.

It is true that Birhan Woldu was starving to death in 1984. It is true that today, her life seems immeasurably better – she is a healthy, beautiful young woman who is studying for exams, not scavenging for food. It is also true that the film of Birhan during the 1984 famine made a major impact upon the UK public; and it may even be true that, as Geldof claims, this film was ‘why we did this’ (2) – why Geldof and co set up Band Aid, releasing the charity single ‘Do They Know It’s Christmas’ in late 1984 and organising the Live Aid concert the following year, which raised significant amounts of money for Ethiopian famine relief.

Above all, it is not true that Birhan Woldu is living proof that ‘it works’ – that a crowd of pop stars and their fans feeling good about themselves in London can transform the lives of the people of Africa.

Rather, the attempt by Bob Geldof and his media fan club to manipulate this young woman’s story into another feel-good tale reveals the patronising, crass and self-obsessed nature of the Live 8 message.

Stewart has funded Birhan and her siblings through education, to the tune of around £80 per month (5). And through reporting on her progress for documentaries after the 1984 famine, he has kept her, even to a limited degree, in the public eye. This is why she ‘is quietly pursuing her dream of higher education in Ethiopia’ – her father, meanwhile, ‘still farms a small plot of land and continues a passion for making honey’.

The nauseating pop-n-politics posturing around Live 8 only obscures critical discussion of the problems with aid and the barriers to Africa’s development.