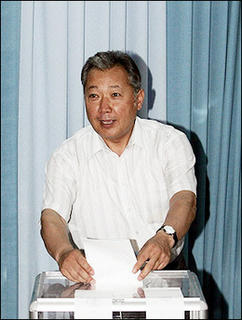 Interim President Kurmanbek Bakiyev casts his ballot at a polling station in Bishkek. Kurmanbek Bakiyev, who led a street revolution in Kyrgyzstan four months ago, was declared the landslide winner of presidential elections. (AP)

The organization for Security and Cooperation in Europe gave Kyrgyzstan a thumbs up on their first election since the overthrow of the Akeyev Regime in March:

The election process was rated either “good” or “very good”.

However, the OSCE saw some problems with the vote count, including a small number of “serious irregularities”.

Acting Kyrgyz leader Kurmanbek Bakiev scored a landslide victory in the poll, winning 89% of the votes.

He was appointed acting president in March following the downfall of former leader Askar Akayev, who fled into exile. 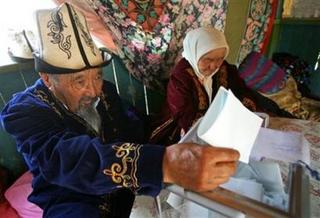 The election saw a large turnout of Kyrgyz voters some who voted in traditional dress:

Bakiyev, 55, secured an overwhelming 89 percent of the popular vote, the central electoral commission said Monday, with over 76 percent of all ballots counted.

His widely-expected victory allows him to formally replace Askar Akayev, who was ousted as the ex-Soviet Central Asian country’s president earlier this year in a popular revolt.

Results published on the commission’s website, set up to provide constantly updated information on the vote’s preliminary results, gave Bakiyev an overwhelming lead, having secured 88.92 percent of the votes counted thus far.

Turnout among the country’s 2.6 million eligible voters was 74.7 percent, well above the minimum required 50 percent, the electoral commission said. 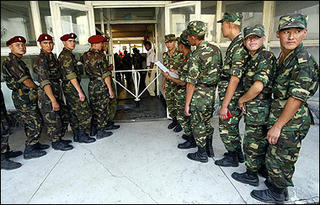 The election marks the first bloodless regime change in Central Asia since the fall of the Soviet Union.

“This should help bring stability to the ex-Soviet republic and throughout central Asia,” Russian Foreign Minister Sergei Lavrov has said.

He said: “We welcome the results of this election. We welcome the fact that the vote passed without incident or serious violations. We think this result will allow stabilisation in Kyrgyzstan and that this will positively influence the situation in Central Asia.”

Robert Mayer at Publius Pundit has a great rundown on the story.

Nathan Hamm at the Registan the Central Asian expert has also been reporting on the story.

Update: Instapundit is reminding all of the “process” and not the “event” in the Kyrgyzstan story. I say,… this event makes for good process!