Lord, it’s great to see people actually protest “for” our flag and not “against” it!

South Korean Conservatives battle police to get at Anti-MacArthur activists! 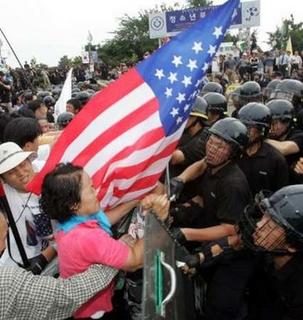 A small gathering of Anti-MacArthur activists were met at a rally at Freedom Park in Inchon, west of Seoulon Sunday, July 17, 2005 by THOUSANDS of Pro-MacArthur supporters:

Protesters hurled rocks, bottles and eggs during a clash Sunday over the legacy of U.S. Gen. Douglas MacArthur, who landed behind North Korean lines a half-century ago and led U.N. forces in an attack that turned the tide of the Korean War.

The dispute erupted when a small group of anti-MacArthur demonstrators marched at a MacArthur war memorial in the western city of Incheon, site of the late general’s 1950s landing. Thousands of MacArthur supporters confronted the protesters in Freedom Park, pelting them with objects and shouting insults. Police were present, and no injuries were reported. 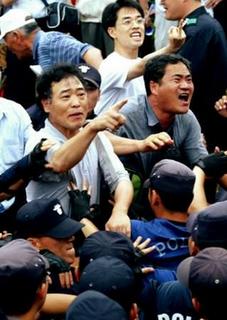 The protesters separated from the activists used hand gestures to show their disagreement!

Song Chul-young, 61, a veteran, disagreed with the anti-MacArther protesters. “Around the statue stand numerous invisible soldiers that fought with him. To take his statue down is to eliminate their souls,” he said.

The 15-foot-tall bronze statue was erected in 1957, four years after the end of the Korean war. It depicts MacArthur holding binoculars and wearing a cap, overlooking the sea where his troops came ashore.

“Not even dogs forget their benefactors,” said former South Korean U.N. Ambassador Park Keun, who spoke at a news conference Friday staged by a veteran’s group. 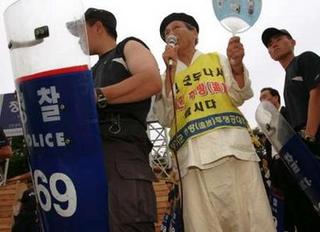 The activists had to be surrounded by police for their own protection.

Some observers link the MacArthur controversy to changing relations between the South Korean government and Washington. South Korea has become increasingly assertive, and President Roh Moo-hyun promised in his successful 2002 election campaign not to “kowtow to the Americans.”

“There already are concerned voices about the abnormal condition of U.S.-(South) Korea relations. Imagine the scene of MacArthur’s statue being taken down broadcast live in homes in the United States and worldwide,” the Dong-A Ilbo daily wrote in an editorial last month. “History shouldn’t be garnished or vandalized with ideology.”

Obviously, the conservatives in South Korea are more aggressive than those in the United States!

Update: Michelle Malkin notes “Why they like us!
GOPinion is linking to this General MacArthur news.