John Howard is not hearing the Leftist drivel! 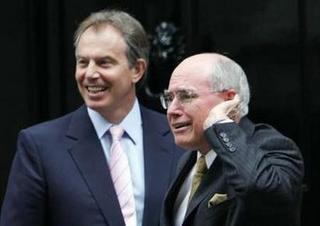 Australian Prime Minister John Howard was in London today with Tony Blair in time to witness the second wave terrorist “tube” bombings. Mr. Howard gave this reporter a “Down Under” tongue lashing:

Howard, who was in New York during the September 11, 2001 attacks, told a delayed press conference with Blair that such attacks would not shake the US-led coalition in Iraq or international efforts to defeat terrorism.

“Once a country has allowed its policies to be determined by terrorism it has given the game away,” Howard said, adding that Australia was united in its sympathy for Britain and the people of London.

“There is no city in the world after our own that Australians have more affection for, more identification with and a greater sense of history about than the city of London,” he said.

Both leaders dismissed suggestions that the latest London attacks showed the “war on terror” was being lost. They also rejected any connection between the attacks and the conflict in Iraq.

“The scourge of terrorism is one that we all face together,” he said.

Howard said the London attacks were not “incident-specific” and noted that 88 Australians had been killed in a night-club bombing in Indonesia months before the 2003 US-led invasion of Iraq.

“I do not know the minds of terrorists … I can only look at objective facts. The objective evidence is that Australia was a terrorist target long before the operation in Iraq,” he said.

Trey Jackson has the video of the Howard & Blair Press Conference. Trey has a few words for Instapundit and I join him.
Indeed!

In respect to Mr. Howard, The Anchoress has a fantastic pictorial of the “Before Iraq” terror.