As Akbar Ganji’s health declines, some see him as a pawn
to American Neo-Conservative Policy!

Iranians Protest for the Release of the Jailed Journalist 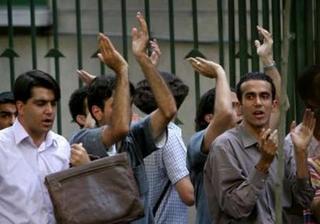 Ganji, 46, an outspoken critic of the Islamic state’s clerical leadership, was rushed to a Tehran hospital last Sunday amid growing fears about his health following his a month-long hunger strike, Ganji’s wife told Reuters.

Senior judiciary officials said the investigative journalist had been admitted for knee surgery, denying he was on a hunger strike.

The human rights lawyer Ebadi echoed concerns of Ganji’s family about his health.

“I call on the judiciary and human rights groups to pay serious attention to my client’s dangerous situation,” Ebadi, who is Ganji’s lawyer, said in the statement faxed to Reuters.

Ganji’s family and rights activists say Ganji has lost more than 52 pounds (24 kg) during his 43 days of hunger strike, which he says is a protest against being detained in spite of his chronic asthma and back pain. 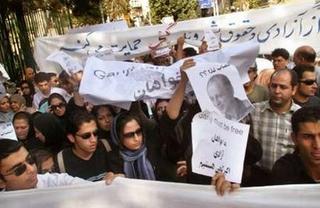 However, Iranian Blog-father Hossein Derakhshan says that Ganji is just a symbol to the American neocons and that a dead Ganji gives Bush what he wants in a unifying symbol for “future phases to change Iran from the outside”.

“The more the American right puts more investment in Ganji by its unprecedented support, the more the Islamic Regime would become determined in taking care of Ganji.”

“Only a DEAD GANJI would give Mr. Bush a unifying symbol for the future phases of their desperate efforts to change the regime of Iran from outside. That’s why they are all loving him so much. Because a dead Ganji will not be able to have nuanced opinions and could easily be hijacked by the neoconservatives for their own agenda.”

I met Hoder (Hossein Derakhshan) at BlogNashville. I was hoping he was more perceptive than this. Here is the reply to Hoder from DoctorZin atRegime Change Iran:

I have been publishing the news on Ganji for years now and I have never met nor published anyone on the American right who fits your caricature.

If the U.S. wanted a dead Ganji as a unifying symbol, why are those on the American right increasing up its support for Ganji? The fact is that a living dissident is a much more powerful symbol for Iranians to emulate.

While you seem to have a low opinion of Ganji, I have admiration for the transformation of this man.

Blogger Stephania, from Free Thoughts, whose opinion I value, is steering away from the “Ganji Story” because of things she has heard about him.

I am not the expert on Ganji. But, what upsets me is the fact that anyone would be twisted enough to think that the Right in America would want to see someone dead for some kind of sick imperialistic reason!