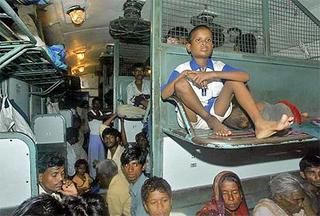 An “unreserved” compartment like this one was the scene of a bomb blast in India, on Thursday. Police suspect the bomb was planted in a toilet. 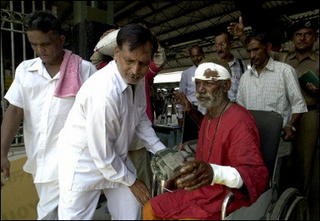 Police in India are searching for clues on who is behind the train blast that killed 13 yesterday:

Police in India said on Friday that an explosion in a train that left 13 people dead and dozens wounded was caused by a bomb planted in a toilet.

Indian railway officials had earlier suggested the blast late on Thursday near Jaunpur town in northern Uttar Pradesh state may have been caused by a cooking gas cylinder, sometimes carried by villagers on trains.

But bomb experts discounted this on Friday.

“There is enough evidence to confirm the use of RDX explosive,” a member of a police bomb squad, who did not want to be named, told Reuters from the site.

Uttar Pradesh Home (interior) Secretary Alok Sinha said authorities did not have any specific leads on who was behind the blast which occurred in an unreserved coach.

“It certainly is not an accident. It is some explosive planted in the coach,” Sinha told Reuters.

“But who could have been behind it has not been ascertained.”

The train was full of passengers at the time:

Indian Railways Minister Laloo Prasad Yadav has ordered an investigation into the explosion, which happened near the town of Jaunpur in Uttar Pradesh.

The “condition of 20 (injured passengers) is serious”.

The unreserved compartment where the blast took place was packed to capacity, and eyewitnesses said people were blown to pieces or thrown out of the train.

In Kashmir 5 Hindus had their throats slit by Muslim extremists in a gruesome siege on a village:

Suspected Muslim militants have raided a village in Indian-administered Kashmir, slitting the throats of five Hindus, police have said.

The attackers entered Dhoob village, 200km (125 miles) north-west of Jammu and segregated Muslims from Hindus before the killings, the police said.