In Nepal, Women Join the Fight for Democracy!

When the going gets tough,… the Democracy Babes get tougher! 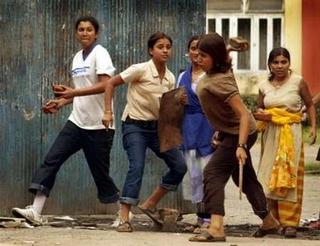 Female student activists from the Padmakanya Campus throw stones and bricks at the police, while shouting anti-monarch slogans against the Nepali king in Kathmandu, July 28, 2005. (Reuters)

The US criticized Nepal for jailing the former Prime Minister as more democracy protests broke out this week:

Mr Deuba and five others were convicted on Tuesday by the country’s corruption commission, set up by King Gyanendra after seizing direct power in February.

Washington said the commission was “extra-judicial” and again called on the king to “restore civil liberties”.

On Thursday, anti-king protesters and police clashed in Kathmandu. 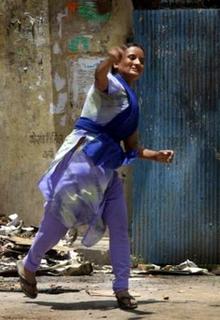 This weekend the US strongly encouraged Nepal to return to democracy:

The US has asked King Gyanendra to reconcile with political parties for immediate restoration of multiparty democracy in Nepal.

“It is the Royal Palace’s compulsion to reach a compromise with political parties to prove its democratic nature,” US Ambassador James F Moriarty said at an interaction programme in eastern Nepal town of Dharan.

“Rather than expecting help from third parties, reconciliation among the legitimate political forces is the best option to resolve the crisis,” the envoy said on Saturday.

Asserting that the US was in favour of restoration of democracy in the Himalayan Kingdom, Moriarty appreciated the seven party alliances’ efforts to resolve the current political crisis. He called on “the eighth force”- the Palace to cooperate with the political parties. 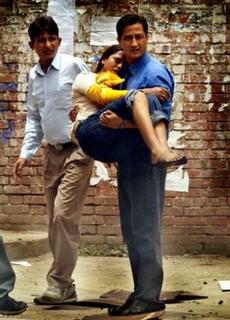 A student (C) from the Padmakanya Campus is being taken to the hospital after she broke her arm during a protest against the Nepali king, in Kathmandu, July 28, 2005. (Reuters)

Meanwhile, Maoist rebels captured a van of Nepali lawmakers that they had captured earlier:

Maoist rebels on Sunday freed seven government officials they had seized in eastern Nepal, and all were safe and in good health, an official said.

The freed hostages telephoned from the town of Birtamod, about 350 miles east of Katmandu to report they had been released, said Vijaya Poudel, the administrative chief of Illam District, where the officials were seized on Saturday.

The rebels stopped the officials as they were traveling in a van on the Mechi highway near Kolbung village, 20 miles north of Birtamod. Of the 10 people in the van, two officials and the wife of one were not held. The officials had apparently defied a rebel order to stay off the road.