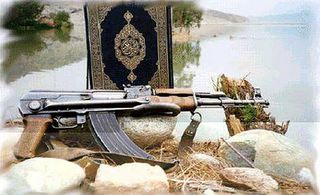 Displaying the Family Koran in Chechnya

a) Human life is sacred and inviolable and every effort shall be made to protect it. In particular no one shall be exposed to injury or death, except under the authority of the Law.

b) Just as in life, so also after death, the sanctity of a person’s body shall be inviolable. It is the obligation of believers to see that a deceased person’s body is handled with due solemnity.

(This was taken from the UNIVERSAL ISLAMIC DECLARATION OF HUMAN RIGHTS)

It’s hard to believe that those words come from the same website where you can find information honoring this man (Shamil Basayev) behind the Beslan School Siege.

Shamil Basayev, the terrorist behind the Beslan School Siege, the Moscow Theatre Siege and numerous other terrorist acts across Russia, is the leader of the Chechen Independence Movement or Jihad.

In another video the man behind the Moscow Theatre Siege is seen taking weapons from a break-in in Chechnya.

In the three-minute recording, the warlord ironically thanks the Ingush government for “preserving our arms and ammunition for us”.

“We have taken what they took from us this year,” he adds.

It is hard to see how Shamil Basayev, the number one wanted man in Chechnya, is living the “Universal Islamic Declaration of Human Rights”.