VIDEO OF THE DEVESTATION FROM THE MASSIVE BOMBS HERE

(7:00 AM EST) Al Qaida group claims responsibility for the blasts

At least 7 Foreigners are Killed in the explosions 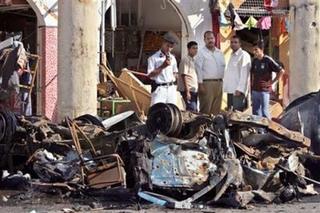 Egypt has a history of terror attacks as Reuters shows in this report.
This terror timeline does some damage to the “It’s all about Iraq!” argument. 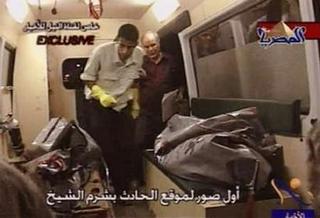 (Approx. 9:30 PM EST)An emergency worker walks among body bags on an ambulence. The death toll has risen to 49.

(10 PM EST) The attacks are now being reported as suicide car bombers:

The attacks on the popular Sinai resort at the peak of the tourist season were the deadliest in Egypt in eight years and officials feared the death toll could rise further.

Police said there were up to seven bombings and witnesses told AFP that at least four of them were suicide car bomb attacks.

(11:55 PM EST) “A suicide car bomber forced the barrier at the entrance of the hotel. A member of the security staff tried to stop him but he sped towards the reception and there was a huge explosion,” a Ghazala hotel employee told AFP.

Medical sources in the Sinai resort city said a total of at least 50 people were killed and at least 150 wounded, 120 of them seriously.

(12:30 AM) At least one blast targeted Egyptian Muslims!

The third detonated at a minibus parking lot in the Old Market, an area about 2 1/2 miles from where many Egyptians and others who work in the resorts live. The blast ripped through a nearby outdoor coffee shop, killing 17 people, believed to be Egyptians, said a security official in the operations control room in Cairo monitoring the crisis.

A damaged car from one of the explosions (AP) 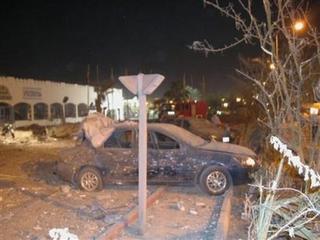 At least four car bombs were used in the attack, according to a security official in the operations control room in Cairo who was monitoring the crisis.

One went off in the driveway of the Ghazala Garden hotel, a four-star resort on the main strip of hotels in Naama Bay, the official said.

Another exploded in the Old Market, an area a few kilometers away, killing 17 people – believed to be Egyptians – sitting at a nearby outdoor coffee shop. Three minibuses were set ablaze, though it was not clear if they were carrying passengers.

Amal Mustafa, 28, an Egyptian who was visiting Sharm with her family, said she drove by the Ghazala Gardens – a four-star resort on the main tourist strip in Naama – and it was “completely burned down, destroyed.” 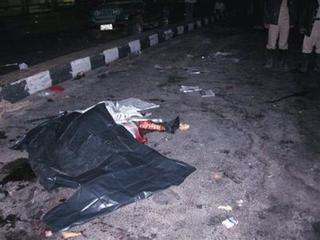 The explosions that shook the resort apparently occured around Naama Bay, a resident said.

(9:20 PM EST)Mustafa Afifi, governor of South Sinai province, said one car bomb exploded in front of the Ghazala Hotel in Naama Bay, the site of most of the resort’s luxury hotels. He was quoted by the state news agency MENA.

Another car bomb exploded in the old market in Sharm el-Sheikh town, about six km (four miles) from Naama Bay. “The third explosion, in a car park at the entrance to Naama Bay, could have been a bag of explosions,” he added. 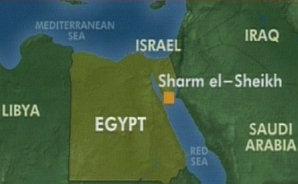 (8:30 PM EST) At least seven explosions kill a reported 36 individuals in the Sharm el-Sheik resort in Egypt around 1 AM Egypt time:

As many as seven explosions, including at least four car bombs, struck the Red Sea resort of Sharm el-Sheik early Saturday, hitting several hotels packed with foreign and Egyptian tourists and killing at least 36 people, witnesses and police said.

Saturday’s explosions at 1:15 a.m. shook windows more than five miles away. Smoke and fire rose from Naama Bay, a main strip of beach hotels in the desert city popular with Israeli and European tourists, witnesses said.

At least four car bombs were used in the attacks, said a security official in the operations control room in Cairo monitoring the crisis. One went off in the driveway of the Ghazala Garden hotel, a 176-room four-star resort on the main strip of hotels in Naama Bay, the official said.

(12 AM EST) The US has condemned the attacks. “We condemn this act in the strongest possible terms. There can be no excuse for the
targeting of innocent civilians,” a U.S. State Department spokesman said in Washington.

“I predict that this will only encourage the loss of patience with Islamist radicalism that is already sweeping the world. That’s the problem for terrorists: If they try to terrorize, they make people mad. If they don’t, then, well, they’re not really terrorists.”

Austin Bay asks, “When will George Galloway and Teddy Kennedy admit Al Qaeda is at war with Arabs and Muslims as well as ‘the West’?”

Jim Hoft
Jim Hoft is the founder and editor of The Gateway Pundit, one of the top conservative news outlets in America. Jim was awarded the Reed Irvine Accuracy in Media Award in 2013 and is the proud recipient of the Breitbart Award for Excellence in Online Journalism from the Americans for Prosperity Foundation in May 2016.
Finally! Politico Is First Fake News Mainstream Outlet to Hint at Joe Biden's Obvious Dementia
Two Days After Inauguration Walmart Announces They Will Expand Offering COVID Vaccinations in US Stores
President Trump Gives Permission for US Troops to Stay at Trump Hotel in Washington DC
For “Open Borders” and Censorship of “Hate Speech” - The EU funded Open Society NGOs with over $35 Million 2019
The Same Party that Stole Military Votes in Michigan and Georgia -- Is Now Forcing Military Men and Women to Sleep on the Floor in a DC Parking Garage
See more...