How to Kill Cops in St. Louis

On Tueday July 5th, Sgt. McEntee was talking to a 13-year-old boy about a fireworks disturbance when a man approached the passenger’s side of Sgt. McEntee’s patrol car and fired a 9 mm handgun several times, striking Sgt. McEntee in the face. 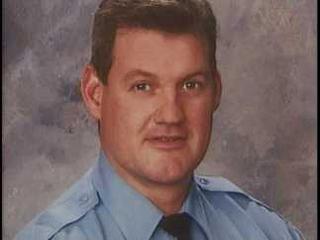 Outside his life as a police officer, Sgt. McEntee coached baseball and soccer teams at the St. Simon the Apostle Catholic School for at least five years. His three children – Katie, 13, Brendan, 10, and Conor, 7 – attend classes there.

On Saturday July 9th, Mary McEntee and her children, hundreds of law enforcement officers, family members and friends packed St. Simon the Apostle Catholic Church in Affton to say goodbye to Sergeant Bill McEntee. As people inside the church celebrated his life and mourned his passing, people who never even met the fallen officer also showed their support.

During his career as a Kirkwood Police officer, Sgt. Bill McEntee touched many lives and saved a few too. Among those he rescued was Reid Williams, who wanted to share his story.

Williams says he and Sgt. McEntee had a special bond, one they forged a few years ago when McEntee saved his life.

The accident happened on South Kirkwood Road. Williams was in his electric wheelchair at the time, trying to cross the street. An 18-wheeler truck clipped his chair, knocking him over.

It was Sgt. Bill McEntee who pulled him out of harm’s way.

But not everyone in St. Louis shares the same respect for Sergeant Bill McEntee and his fellow St. Louis police officers.

One week after Sgt. McEntee’s burial two local deejays made a “joke” out of killing police officers on their morning show:

“DJ Kaos” and “DJ Sylli Asz” lived up to their names last Wednesday morning (July 13th) when they devoted part of their show on 100.3 The Beat (KATZ-FM) to methods of combating police officers.

They gave their audience tips on how to disarm and injure police officers. One bit of advice told people to fight for the officer’s radio so he can’t call for help.

This apparent attempt at humor, coming in the wake of the murder of a police officer in Kirkwood, inspired a firestorm of protest from local cops and some community members.

The two were suspended without pay.

But this controversy has not died down, yet. Many in the St. Louis Community are still in an uproar over the disgusting remarks made by the morning show hosts.

* St. Louis Police Chief Joe Mokwa called on-air comments wrong and inappropriate, but seemed willing to forgive. “They made a mistake. I’m willing to move on and forget about it.”

Sergeant Otten is far from satisfied by the punishment. “What does a suspension do? It does nothing. That shows a horrible lack of character and moral judgment”

* StLMedia.net goes a step further and is asking that the Clear Channel’s Market Manager be fired from his state position:

Lee Armstrong Clear has shown his disinclination over the past few weeks to be responsive to the needs of the communities which his radio stations serve. He does not answer nor does he return phone calls concerning the furor he has allowed to continue.

Clear has allowed a pair of runaway thug DJ’s on one of his stations to get away with threatening the health, safety and welfare of area police officers and be punished with only an “indefinite suspension”, during which they will be paid their full salaries and benefits.

That he will lead the state broadcasters’ association is incomprehensible, considering this matter.

* And, some area police officers are planning to organize a boycott:

Area Police message boards have called for his resignation or firing, and his actions have been the subject of letters from local and national FOP officers as well, and, unless Clear Channel corporate management intervenes with appropriate action, there may well be a nationwide boycott against the company’s 1200+ stations and sponsors.

* And, that’s not all…some local black residents are excusing the deejays:

“Black people feel a certain way about the police because of what they’ve seen in the news media or what happened to someone close to them or themselves,” said local barber Eric Palmer.

The often adversarial and sometimes hostile relationship between police and the African-American community prompted 18th Ward Alderman Terry Kennedy to introduce a Citizens Review Board Bill because many local blacks don’t trusts the police to justly police themselves.

Some regular listeners to the “Kaos Morning Show” thought it was unfair that the jocks were singled out for one incident, especially when the deejays also have mentioned the police in a positive light.

This story is far from being over…

But, in the mean time, Mary McEntee drops one of her children off at soccer practice. And, Mary and her three children, Katie, Brendan, and Conor, get used to life without Daddy.