Somebody should tell Hillary to quit with the Alfred E. Newman (Neuman) jokes. She does best when she stays away from humor. Her humor gets her in trouble (and it’s not even original!). 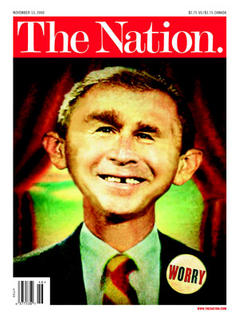 Hillary poked fun of Chimpy-Bush and the economy this weekend at an Aspen Ideas Festival.

But, in reality the situation looks better today than when “We Are the President!” was in office. The economy is tracking right along (as Polipundit noted last week) thanks to Chimpy and his economic policy team. And, things even look better, comparatively, than when Slick was handing out cigars in the White House.

So really the joke is on Hill.
Ann Althouse has some advice.
Blogs For Bush doesn’t get the joke, either.

Jim Hoft
Jim Hoft is the founder and editor of The Gateway Pundit, one of the top conservative news outlets in America. Jim was awarded the Reed Irvine Accuracy in Media Award in 2013 and is the proud recipient of the Breitbart Award for Excellence in Online Journalism from the Americans for Prosperity Foundation in May 2016.
FBI Arrests CDC Critic Dr. Simone Gold on Wednesday After She Was Filmed in the US Capitol Walking Around with a Bullhorn -- FBI Singled Her Out
John Brennan Gives the Plan Away: Biden Officials Moving in "Laser Light Fashion" to Identify and "Root Out" Political Opposition from Population (VIDEO)
Remember When They Said the Betsy Ross Flag was Racist? - Well, Now It's Not Racist cuz Joe Biden Used It
Soviets Used "Operation Trust" to Identify, Arrest and Persecute Anti-Communists - Is That What the Deep State Has Planned for Q-Anon?
Racist Joe Biden's First Move as President Includes Firing the Black Guy in a Power Position
See more...