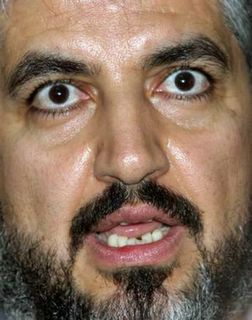 Hamas “politburo” chief Khaled Meshaal talks to reporters after a meeting of Palestinian factions in Damascus on July 5, 2005. HAmas has turned down offers to join a Unity Government with President Abbas.

Hamas has snubbed offers for a “Unity Government” in the West Bank after Jewish settlers withdraw in late August:

The Islamic militant group Hamas on Monday rejected an invitation to join the Palestinian cabinet, snubbing President Mahmoud Abbas who wants a unity government to help him control Gaza after Israel’s pullout.

Abbas, facing public pressure to curb growing lawlessness in Palestinian areas, last week offered a place for armed groups in his government to foster a smooth evacuation of Israeli settlers from the occupied territory due to begin in mid-August.

“Hamas has decided to reject the offer of (Abbas’s) Fatah movement to join a national unity government,” said Hamas spokesman Mushir al-Masri. “Forming a unity government at this late time will not be useful.”